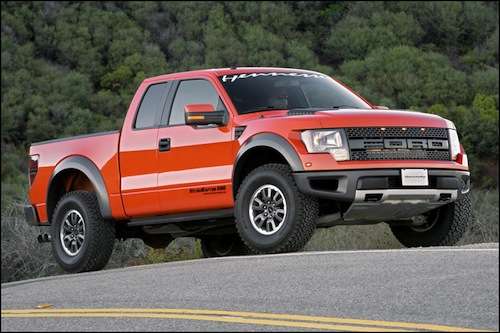 The VelociRaptor 600 takes F150 Raptor to another level [video]

Hennessey Performance says that if you are looking for a vehicle that does it all, on and off road, the Ford F150 Raptor truck delivers. But if you want the ultimate muscle truck, their VelociRaptor supercharged takes it to a whole new level. John Hennessey takes fast vehicles and makes them even faster. When Shelby American unveiled the Shelby Raptor at the New York Auto Show, we thought they had revealed the ultimate muscle truck. But the Hennessey VelociRaptor 600 Supercharged is another animal all together. How does it compare to the Shelby Raptor?

John Luft, president of Shelby American, said "Within a few minutes of its unveiling, the telephone began ringing off the hook for the new Shelby Raptor.” He went on to say, “Before we accepted a single order to meet the landslide of requests, we decided to expand the number of muscle trucks available per model year." Shelby American initially was going to produce a limited number of Shelby Raptors, but the new muscle truck was so popular that they have had to increase their initial production forecast.

But Hennessey Performance has one upped Shelby and came up with a truck that is truly scary fast. But that is what we would expect from Hennessey Performance. This is what they do everyday at their performance shop near Austin, TX. They took the stock Ford F150 SVT Raptor V8 and reworked the 6.2-liter powerplant. The VelociRaptor 600 Supercharged Upgrade pumps out 600 horsepower @ 5,700 rpm.

And if you are brave enough to take it out in the dirt, it will launch from 0-60 mph in a neck-snapping 5.2 seconds. Take it out to the track and it will run the quarter mile in 13.6 seconds at a 103 mph trap speed. If you have a long enough track it has a top speed of 110 mph which is limited because of the off-road tires. If you put performance street tires on the muscle truck, the top speed would be much higher.

The Hennessey VelociRaptor 600 Supercharged comes with a number of upgrades to the engine. They include a TVS2300 Supercharger System, Air-to-Water Intercooler, High Flow Air Induction, and a Fuel Injector Upgrade. It also features a HPE Engine Management Calibration and Chassis Dyno Tuning & Road Testing before it’s delivered to the customer.

The Hennessey Hennessey VelociRaptor 600 Supercharged Supercharged truck is enough to convert any city slicker track guy into a redneck off-roader. If you want the ultimate muscle truck and have enough courage to take this monster truck in the dirt, you can get more information by contacting Hennessey Performance at 979-885-1300.

Hold on and check out the dyno video of the incredible VelociRaptor 600 below!