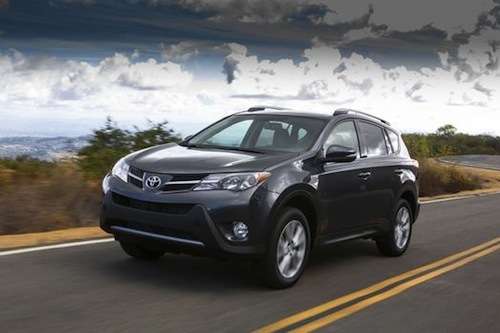 Thanks to two important changes, buyers are purchasing the all-new 2013 Toyota RAV4 at record numbers and they are flying off dealer lots.
Advertisement

Toyota knew they had to do something with the next-generation Toyota RAV4 because of the extreme competition in the mid-size SUV segment. The new RAV4 competes with the 2014 Subaru Forester, Honda CR-V and Mazda CX-5 in the fastest growing segment in the auto industry. They couldn’t stand pat while Subaru introduced the all-new redesigned 2014 Forester. And Toyota engineers went to the drawing board and came up with a winner. What has happened since Toyota introduced the new RAV4?

Toyota introduced the 2013 RAV4 in January of this year and buyers responded immediately. Toyota reports that in February, the RAV4 saw a sales increase of nearly 10 percent over the same period last year with the new model making up 65 percent of all RAV4 sales. February was the first full month in showrooms. And it hasn’t been just a one-month-and done wonder. Toyota says RAV4 sales in April increased 17 percent over the same period last year and are up nearly nine percent for the year.

What makes the next-generation RAV4 such a hit with buyers?

Buyers responded to the newly designed exterior that received a much-needed update. The previous generation RAV4 had a functional design, but need to be changed to reflect Toyoda’s goal to bring a new progressive look to the lineup. The fourth-generation RAV4 gets more aggressive styling with a sleek-sloping roofline and aggressively sculpted front and rear fenders. Contemporary buyers are looking for more than just a functional design and want something that has a fun character.

Toyota has definitely moved the new 2013 RAV4 in a new contemporary direction. Early dealer reports have found buyers of the new RAV4 have been particularly attracted to its dynamic exterior design, perceiving it as contemporary and very stylish. “When developing the new RAV4 we spent a lot of time talking to consumers to understand what they wanted and needed in a small SUV,” said Bill Fay, group vice president and general manager, Toyota Division.  “We have met those needs and now, since its launch, the new RAV4 is one of the fastest selling vehicles in the Toyota line up.”

The funky spare tire had to go

The Toyota RAV4 spare tire on the back of the tailgate has been like a bad dream that won’t go away. But thankfully Toyota listened, took it off, and put a space-saver spare tire under the rear cargo area. Toyota engineers made a dramatic switch and a “significant break with its heritage,” by changing the side-hinged rear door to a convenient roof-hinged liftgate. And buyers have responded positively to the much needed change. Another first for the next-generation RAV4 will be a one-touch power rear liftgate with driver-selectable memory height settings that will come standard on the Limited grade model.

The new exterior design also affects the interior dimensions of the 2013 model and the cargo area is deeper, larger and easier to access than in the previous generation. The cargo capacity now features just over 38.4 cu. ft. of cargo behind the rear seats.  With rear seats folded, RAV4 has class-leading maximum cargo capacity of 73.4 cu. ft.

With the new 2014 Subaru Forester and Honda CR-V both reporting record sales of their new crossovers, it looks like the new fourth-generation 2013 Toyota RAV4 is going to give the competition a good run for their money. The new exterior styling and roof-hinged liftgate are two big reasons why the RAV4 is one of the fastest-selling vehicles in the Toyota lineup.