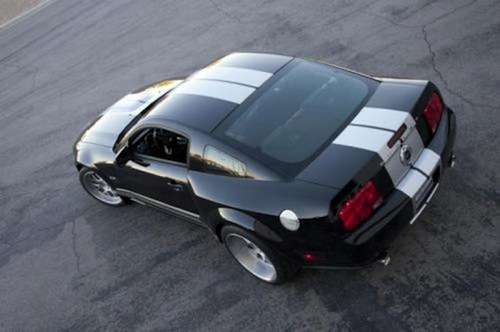 If you want to boost performance on your 2010-2014 Ford Mustang and Shelby models, Shelby Performance parts now offers a new wide body kit that was first introduced on the 2013 Shelby GT500 Super Snake at the North American International Auto Show in Detroit earlier this year. Now owners of new generation model Ford Mustangs and Shelby cars can put more meat on the ground for better traction and performance. Where do owners get the new kits and where can they be installed?

Shelby gives owners the option of buying the kit and having it installed by a local performance shop of their choosing. Previously, Mustang owners had to send their car to Shelby headquarters in Las Vegas to get performance upgrades. “The Shelby Wide Body Kit for 2005-2009 Mustang and Shelby’s, as well as our New York and Detroit auto show generated so much interest by current model owners that we decided to offer the package to them, as well,” said Shelby Performance Parts Vice President Jer Gervasi. “This means that 2009-2014 Mustang and Shelby owners won’t have to send their car to our Las Vegas facilities to tailor fit a Shelby Wide Body Kit to their ride.”

The performance-boosting 2010-2014 Mustang and Shelby kits are available in two versions. The complete package includes rear quarter panels, adding 6 inches of fender to house up to 13 inch rear wheels, as well as the front quarter panels that allow for 10 inch front wheels. This will give current-generation Mustang owners the ability to put more rubber and traction on the road and track. Owners can also choose the rear-only option if they just want big rubber on the rear only.

Both packages will include a Shelby Billet Fuel Door, installation instructions, special tools and all the necessary hardware for installation. A profession al body shop will need to do the body modifications as extensive body and paint work is needed to install the kit. The ability to install substantial 345 wide rear tires “puts Mustang power to the pavement as never before.”

2010-2014 Mustang and Shelby owners can not only improve the looks of their cars, but the performance enhancement is significant. “Built using lightweight components and extraordinary craftsmanship, the Shelby Wide Body Kit is built to OEM-quality fit and finish to seamlessly integrate into the Mustang’s body lines,” added Gervasi. “This package adds serious grip to the Mustang that will turn heads and quarter miles.”

Shelby has announced that the rear only package for 2010-2014 Mustangs and Shelby’s starts at $3,399, and the four quarter panel kit is $5,999, not including wheels and tires. 2010-2014 Ford Mustang and Shelby owners can now get the “Shelby Magic” through Shelby branded styling and performance parts,” said Shelby American President John Luft.

The new wide-body kits are available at www.shelbyperformanceparts.com or customers can call 702-405-3500 for more information.