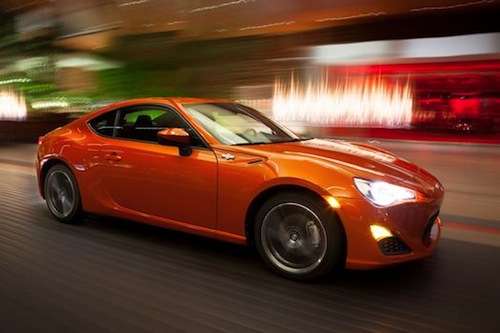 A conversation with a chief project engineer from Toyota reveals that a future high-performance Toyota GT86, Scion FR-S and Subaru BRZ may get a power boost from hybrid power.
Advertisement

When Autocar was in Geneva for the 83rd International Motor Show, they had a chance to sit down with Toyota chief engineer Tetsuya Tada and found out some interesting things about boosting power in the next-generation Toyota GT86 (Scion FR-S in the U.S.). Almost from the beginning, fans of the Toyota GT86, Scion FR-S and Subaru BRZ have been asking when the sporty two-door coupe would get a turbocharger and more power. Subaru has said they are working on a faster version of the rear-drive coupe. But coming in the form of hybrid-electric power was not on anyone's radar.

Hybrid power is a viable option for GT86

According to Autocar, chief engineer Tetsuya Tada told them that a high-performance gasoline-hybrid version of the Toyota GT86 (Scion FR-S) is being considered as an option at Toyota. This would be a different option than most had thought, and most were thinking it would come from either a turbocharger or superchanging the Subaru boxer engine. But Toyota is the leader in hybrid technology, and they have the knowledge and experience to pull it off. This would give Toyota and Subaru the ability to get more performance from the rear-driven two-seater, and at the same time boost fuel-efficiency. It could be a brilliant plan by the Japanese automaker.

Tada indicated that the new technology would possibly show up and be released later in the sports car’s lifecycle. In the conversation with Autocar, Tada said, “I’ve been asked a lot about a turbocharging. We are already working on a mid-life facelift for the car, and we are investigating both turbocharging and supercharging too,” he added. “But an electric motor assistance solution is also possible, and would bring benefits that forced induction does not.”

A high-performance variant is the focus

He said that after the launch and successful sales targets of the coupe, and now that the convertible is finished, it’s time to focus on a high-performance GT86. Tada went on to tell Autocar, "Now that they have that proof, we can begin to think about other development ideas for the car. But we must guard against compromising any of the key virtues of the standard GT86 in the pursuit of more power.”

The hybrid power could serve two purposes. The electric motor assist would provide a substantial low-rpm torque boost for the 2.0-liter Subaru Boxer engine, without compromising fuel-economy and emissions. Those were the two major concerns for Toyota and Subaru as they sought to increase power. And the batteries would be carried low in the chassis which would further lower the car’s center of gravity and increase performance in the corners.

The technology is already developed

The Toyota engineer said that experimental underbody aerodynamic parts could be used to adjust the car’s handling balance should weight distribution be affected. “Our TRD tuning department has found it easy to take 100kg out of the kerbweight, and have developed certain underbody fins and plates that can be employed to alter the dynamic balance of the car, to increase or reduce oversteer at medium and high speeds. They have quite a pronounced effect,” he said.

Toyota has already seen a perfect example of hybrid power boosting performance with their all-new 2013 Lexus GS 450h Hybrid model. The GS 450h will outperform the GS Sport version, and the hybrid is a tenth quicker than the 350 and gets better fuel-economy. Toyota is finding out they can get better performance and go green at the same time. We could be seeing the future of high-performance vehicles taking shape right before our eyes.