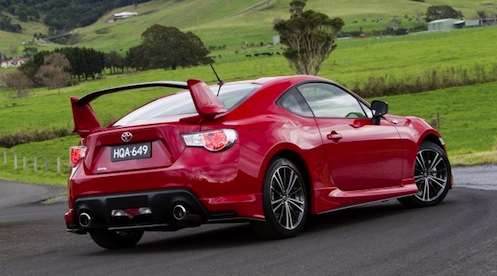 Toyota has announced that the GT 86 sports car has received a new factory aerodynamic package that could signal future Scion FR-S upgrades.
Advertisement

Toyota has just announced a new aero package for its newly launched Toyota GT 86 which is the cousin to the 2013 Scion FR-S here in the U.S. Toyota created the new aerodynamic kit to go along with the on-sale date of the GT 86 sports car in Australia. The new kit will give the GT 86 an aggressive look, but its more than just for aesthetics.

The Toyota GT 86 factory accessories are designed to reduce wind drag and increase downforce for greater handling stability on the track and at fast highway speeds. The new aero kit will help the rear-drive sports car maintain the vehicle's already slippery 0.27 drag coefficient. The aero package consists of a new front bumper skirt, side skirts, rear bumper skirt and large rear spoiler. The newly offered kit is designed for the driving enthusiast who wants to get the most out of the Toyota GT 86 sports car.

According to the press release from Toyota, the aero kit offers the front bumper skirt with vertical fins to control air entering the front grille and dual canards at 12-degree angles to give the GT 86 optimum handling stability. The side skirt gets a specially rounded leading edge to assist airflow evacuation from the front wheel housing to keep the brakes cool during hard braking on the track.

The rear bumper skirt has a unique design that projects horizontally, to reduce air turbulence from the front as it passes underneath the car to create less drag underneath the car. The rear skirt also maximizes air flow over the rear fin. The large rear spoiler incorporates horizontal 'winglets' on the uprights, to increase downforce and optimize handling stability. The rear spoiler center section gets a special gloss black paint on all exterior color offerings.

The Toyota GT 86 is still powered by the same Subaru boxer engine, developed in a partnership with Subaru and comes with a 2.0-liter naturally aspirated four-cylinder engine producing 200 horsepower and 151 lb. ft. of torque. The Subaru boxer engine incorporates Toyota’s cutting-edge D-4S direct and port injection that comes from the Lexus IS F.

The new body kit announced by Toyota is available now in Australia, and while Scion has not confirmed the same options will be available on the FR-S here in the U.S., it is highly likely that it will be available soon worldwide. The price for the new upgrade package has been set at $3,000 and it’s available for both models, with the manual or automatic transmission.