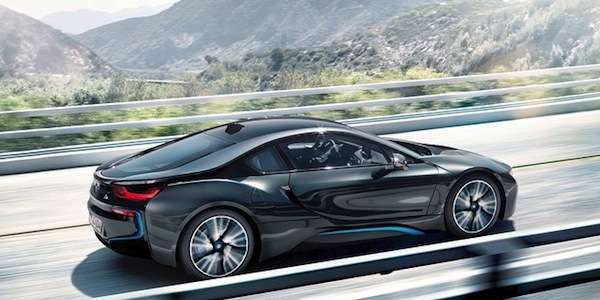 Top global competition proves why revolutionary BMW i8 is the best

When it comes to proving why BMW is the best engine builder in the world, The 2015 Engine of the Year awards tell the story. Why is BMW i8 the best?
Advertisement

BMW walked away with the top award for the International Engine of the Year Awards in impressive fashion. The BMW i8 drive unit not only picks up two class wins, but it also takes home the overall winning award. BMW also gets an award in the 2.5 to 3.0-liter displacement category, with its M TwinPower Turbo six-cylinder in-line gasoline engine in the BMW M3 and BMW M4.

Four wins in the latest International Engine of the Year Awards impressively demonstrates BMW’s engine-building prowess. It was the i8’s TwinPower Turbo three-cylinder petrol engine that impressed the judges more than any other powerplant on the planet. The overall drive unit of the BMW i8 claimed a class win as the best “new engine”. Its combination of electric motor and gas engine is what earned it overall victory.

What impressed the judges?

The new BMW i8 not only gets impressive fuel mileage, but the performance car is a blast to drive. i8 sprints from 0-100 km/h (62 mph) in just 4.4 seconds. Yet, combined fuel consumption (as calculated in the EU test cycle for plug-in hybrid vehicles) is just 2.1 liters per 100 kilometers (approx. 135 mpg imp) plus 11.9 kWh of electricity. This equates to CO2 emissions of 49 grams per kilometer.

The future of performance is here now

The new BMW i8 has been praised by performance enthusiasts around the globe for “its breadth of abilities.” Its 1.5-liter three-cylinder turbocharged gas engine combined with an electric motor produces 357 horsepower and 420 lb. ft of torque and comes wit impressive driving dynamics and performance. That’s also due in part to its light carbon fiber reinforced central tub. It delivers the kind of high-performance that would excite any driving enthusiast.

BMW i8 will be a game changer

BMW developed the new i8 for performance enthusiasts who wanted both high-performance and efficiency in a luxury package. Dr Ian Robertson, BMW AG Management Board member for Sales and Marketing BMW, said: “We always knew the BMW i8 was going to be a game changing vehicle and the strength of orders shows just how desirable this car is for customers.”

This impressive plug-in hybrid system, developed and produced by BMW, enables a range of up to 37 kilometers (23 miles) in the EU test cycle and a top speed of 120 km/h (75 mph) on electric power alone. BMW has developed the performance car that is high on the fun to drive meter. The judges of the Engine of the Year 2015 global awards say the revolutionary BMW i8 is the best.

ABHISHEK SUKHANI wrote on June 19, 2015 - 7:50am Permalink
I guess that is what people except from a car when they pay INR2.29 out of your pockets. Not a big deal
mike w wrote on June 20, 2015 - 6:58pm Permalink
I agree. Never looked at it that way but yes cars in this price class are usually very impressive.

LG's New EV Battery Plant Is a Welcome News for Tesla
Tesla Giga Berlin's New Hurdle: It's Not Only the Gov't, but Now Tesla Itself
END_OF_DOCUMENT_TOKEN_TO_BE_REPLACED