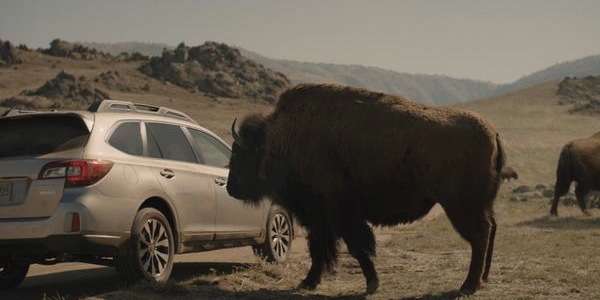 The all-new 2015 Subaru Outback is a rugged performer. What similarities does it share with the North American Bison?
Advertisement

There’s a saying here in Colorado which is Bison country, “Bison have an even disposition, they are always mad.” If you’ve ever spent any time around these huge animals, you know just how mean they can be. The Bison is one of the most rugged animals on the planet. They have to be to withstand the rough winters on the plains of Colorado. The 2015 Subaru Outback may not be mean, but it shares some similarities with the American Bison. It comes with two qualities that make it rugged like a Bison.

Subaru launched the all-new 2015 Outback and has two new TV spots they just released. Subaru’s latest ad campaign focuses on the new-generation Outback going where you’ve never gone before. It also focuses on the multi-use vehicle’s ability to “go anywhere.” A loyal following of Subaru owners use the Outback for much more than a grocery hauler. They use the wagon for getting them off the beaten bath and away from civilization. The Outback features all-wheel drive, and plenty of ground clearance for off-road adventures. It comes with specific features that set it apart from all other small crossovers.

2015 Outback now comes with two new rugged features that make it an even better vehicle for adventure seekers. It comes with enhanced Active AWD and new X-Mode For 2015. Outback features a refined version of the Active Torque Split version of Symmetrical AWD.

The system’s electronically managed continuously variable transfer clutch controls torque distribution in response to driving conditions and wheel slippage. As the driver accelerates through turns and curves, Active Torque Split AWD optimizes traction and steering response, particularly when the road surface is snowy or slick. It’s ideal for getting

Active Torque Vectoring, an enhancement of the Vehicle Dynamics Control (VDC) stability and traction control system, fosters more neutral cornering by applying brake pressure to the inside front wheel. The 2015 Outback 2.5i now uses larger brakes previously available only on the 6-cylinder model, and all models now have ventilated rear discs in place of solid discs used in the old model.

All 2015 Outback models now come equipped with the X-Mode system as standard equipment, which debuted on the new-generation 2014 Forester. When engaged by a switch on the console, X-Mode optimizes engine output and CVT ratio position, increases Active All-Wheel Drive engagement and uses enhanced control logic for the Vehicle Dynamics Control (VDC) system to reduce individual wheel spin. It’s a must for extreme off-road excursions.

Subaru has debuted its new advertising campaign for the 2015 Outback. The campaign includes two national television spots by acclaimed director Lance Acord (known for his work on Lost in Translation and Being John Malkovich). The two TV spots, “Bison” and “Memory Lane”, highlight the Outback crossover’s reliability, versatility, longevity, and safety within Subaru’s broader campaign, “Love”.

The all-new 2015 Subaru Outback is a rugged performer and shares similarities with the North American Bison, like its ability to deal with the extreme elements and its “go anywhere” rugged attitude.