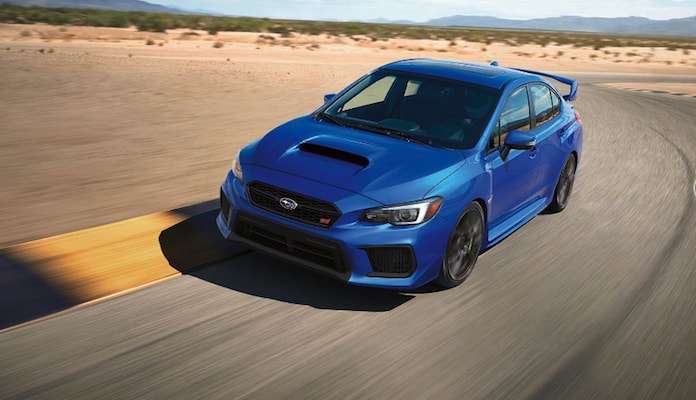 The 2018 Subaru WRX and WRX STI finished the year with Forester, BRZ and Legacy. All down in sales.
Advertisement

The 2018 Subaru WRX STI has something in common with the 2018 Forester, Legacy and BRZ. They all finished 2017 down in sales over the previous year. Subaru of America reported record 2017 sales, but it was due to two models, Crosstrek and Impreza both up significantly for the year. Both these models got the new Subaru Global Platform (SGP) which has generated huge consumer interest. Outback remains Subaru's top sales king and was also slightly up for the year (+3.3%).

This is the second year in-a-row the Subaru WRX and WRX STI have been down from the previous year. Subaru saw the WRX/STI drop slightly in 2016 (-1.4 percent), and again in 2017 (-5.8 percent). Canada and Australia, Subaru’s next largest global markets, don’t show exact sales figures, but both countries didn’t even mention WRX/STI sales, so we can assume they were down there also.

While these numbers aren’t a huge downturn for the sport-tuned 2018 Subaru WRX and performance-tuned WRX STI, they do show a slowing interest in the performance sedans. Subaru needs a more aggressive design change and a new updated DIT boxer power plant in the WRX STI to get enthusiasts back to the showrooms. The fifth-generation WRX/STI won’t arrive until 2019 as a 2020 model.

Surprisingly, the 2018 Subaru BRZ was only down (-0.2 percent) for the year in the U.S. market, and Subaru Australia reported strong sales of the BRZ, which finished the year with 786 sales, up 137.5 percent over the previous year. Subaru has confirmed BRZ will see a second-generation model along with it’s twin, Toyota 86. The remodel will come in 2020 and it will be the next-to-last Subaru model to get the new SGP.

The sport-tuned Subaru WRX and performance-tuned WRX STI sedans will be the next after Forester to get the new Subaru architecture and will get a complete overhaul which will generate huge fan interest when they will arrive in 2019. Fans are hoping for even more changes like a new 5-Door hatch body style to return, and possibly a new FA20 2.0-liter DIT power plant under the hood. Neither has been confirmed by Subaru.

We like to hear from our readers, so leave your comments below. What would get you excited about the fifth-generation 2020 Subaru WRX STI? If you liked this article share it with friends and tweet it out to your followers!