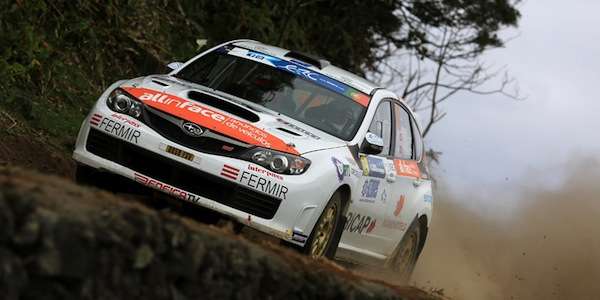 The Subaru WRX STI has finished round 5 of the FIA European Rally Championship (ERC) on Sao Miguel.
Advertisement

Subaru is involved in Rally racing all over the globe and the WRX STI performance car has finished round 5 of the FIA European Rally Championship (ERC) on Sao Miguel. It’s the largest island of the Portuguese archipelago known as the Acores. It’s important for Subaru because they sell the Subaru WRX STI around the globe. This rally features stages on gravel roads that thread their way through the magnificent scenery of the island that is located off the coast of Brazil. But imagine driving the WRX STI fast through dense fog.

This is a challenging race due to the islands changing weather conditions. The costal weather which is unique to the small island, can get foggy and can come and go suddenly. These weather conditions pose a challenge to the Subaru WRX STI drivers. The race was run in May and Subaru had four WRX STIs entires in the ERC rally race.

The Rally on Sao Miguel

Day one saw three stages run in the evening while the next day consisted of 8 stages with 2 loops of 4 stages each. A famous stage of the rally includes the cars running along a volcanic lake. Like last year, the race was broadcast on Eurosport. The last day is when the Subaru WRX STI teams tackled 6 stages including a Super Special Stage. The total competitive distance of all 17 stages was 216.64km.