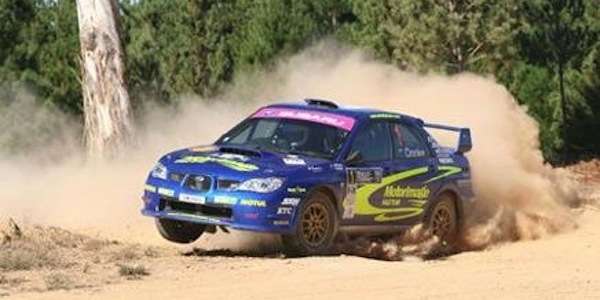 Subaru Australia is giving 2015 Subaru WRX STI buyers a special treat. Who is the legendary Australian Rally Champion who will be in Melbourne?
Advertisement

The Subaru Docklands dealership in Melbourne is giving 2015 Subaru WRX STI buyers a special treat this next weekend. Subaru Ambassador and former Australian Rally Champion Cody Crocker will be at the Australian Subaru dealer to highlight the 2015 WRX STI’s amazing all-wheel-drive grip in a fun, engaging way. On Saturday August 16, Docklands will showcase Subaru’s exceptional Symmetrical AWD capabilities by bringing in tons of snow and dumping it on the outlet’s driver training area.

They will give a ability graphic demonstration of the benefits of Subaru’s All-Wheel Drive technology. Of course, it’s winter in Australia and the snow will stay on the driver training area while they do the demonstrations. But the highlight will be the arrival of former Australian Rally Champion and Subaru Ambassador Cody Crocker who will be on hand for the event.

Who better to be behind the wheel?

Cody also competed with the MotorImage Racing Team based in Singapore, which focused on the Asia-Pacific Rally Championship Series. Subaru's primary goal for the series was to demonstrate the superiority of its All-Wheel Drive and symmetrical drive train layout. The gravel roads of Whangarei in New Zealand, and red mud in Malaysia, were perfect testing grounds for the speed, strength and durability of the Subaru WRX STI. Cody Crocker was behind the wheel.

The fun event will also feature Mount Buller ice igloo and snowboard ride plus the chance to win a family holiday at the resort and the use of an accessorized 2015 Subaru Forester or 2015 Outback to get you there. Spot prizes of Mount Buller daily ski passes will also be given away.  Kids will be able to toboggan slide down the ramp from the new car showroom. And special screenings of this year’s mega hit move, Frozen will be shown in the dealership’s Subaru Theatre.

The Australian Subaru dealer will also be offering free hot chocolate, seafood chowder, minestrone soup, hot jam donuts, the All-Wheel Drive Experience barbecue and snow cones. If you live in the Melbourne are, it will be a special treat to see former Australian Rally Champion Cody Crocker who will be on hand demonstrating the all-wheel-drive capabilities of the 2015 Subaru WRX STI. Activities get underway Saturday August 16 at 9am.

Other 2015 Subaru WRX STI stories of interest.
Will Subaru return to WRC with a startling new 2015 WRX STI?