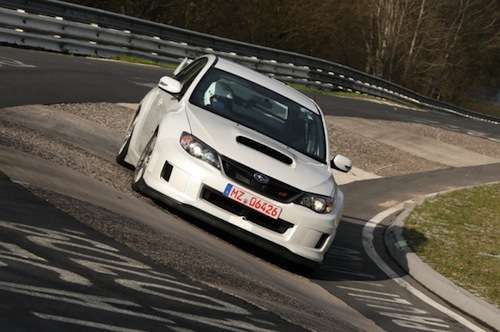 The 2013 Subaru Impreza WRX STI race car that is scheduled to participate in the 24 Hours Nurburgring endurance race will be unveiled at the Tokyo Motor Salon next month.
Advertisement

Subaru and Subaru Tecnica International Inc. (STI), announced its exhibition of the 2013 Subaru Impreza WRX STI race car at the upcoming 2013 Tokyo Auto Salon with NAPAC (Japan Car Parts and Aftermarket Promotion Association). The show will be held January 11th to 13th, 2013 at the Makuhari Messe in Chiba prefecture in Japan. The design of the Subaru booth will feature the theme, "Unchanging spirit pursuing driving pleasure -Proud of BOXER." In that booth Subaru Tecnica International Inc., will showcase the new WRX STI race car. Subaru will also be unveiling three new Sport Concepts at the Salon this year.

STI is the management arm of all Subaru Motorsport activities. Their operations in Mitaka, Tokyo, oversee the development of motorsport engines and chassis, development of Subaru STI versions and STI original limited edition cars. They also develop and manufacture competition sports parts, tuning parts and accessories for Subaru cars. They handle everything on the racing side with all Subaru motorsport activities and the planning and operation of motorsport promotional events and motorsport exhibition at auto shows. STI also does the advanced testing and research and development of the WRX STI in Nurburgring.

The president of Subaru Tecnica International Inc., Hiroyuki Karamatsu, will be on hand to unveil the new 2013 Subaru Impreza WRX STI that is scheduled to participate in the 2013 24 Hours Nurburgring endurance race. The race cars for the Super GT race and International Rally Challenge (IRC) will also be exhibited. That would include the Subaru BRZ GT300, Impreza WRX STI 4-door Group R4 specification model; and Subaru BRZ "GAZOO Racing 86 / BRZ Race.”

STI race entries will be announced

Subaru will announce its entries of the Super GT races, IRC and 24 Hours Nurburgring at their display booth that was designed in the image of a catwalk similar to that of fashion shows. The entire Subaru lineup will be exhibited in the same way under the lights, sound and image effects. The Impreza WRX STI race car will displayed and make its entrance before the official party starts at the legendary Nordschleife.

The 24-hour endurance race events will be held on May 17-20, 2013 as the drivers in the ADAC Zurich 24-hour race will again be piloting their cars around the 25-kilometer long combination of Nordschleife and Grand Prix Circuit. For one day and one night the driver of the WRX STI along with the other drivers will push themselves and their machines to the limit. The field of over 200 vehicles will compete while driving full speed for one whole day and night around the longest racetrack in the world.

The team at STI will take all their work and put it to the test as they take the 2013 Subaru Impreza WRX STI race car and push it to extreme limits.