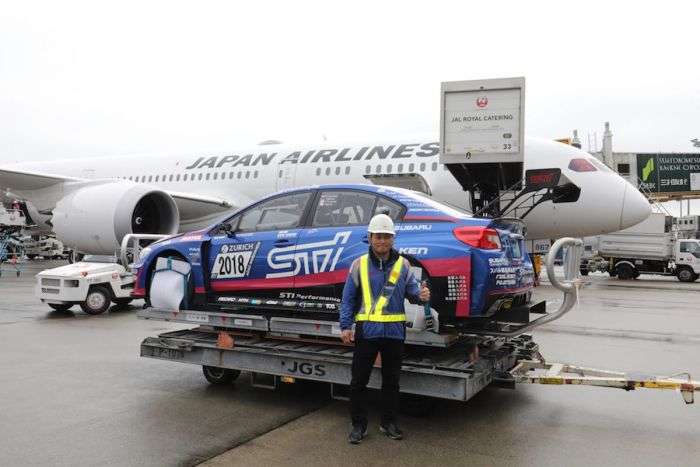 The legendary Nurburgring 24-hour race takes place from May 10-13, 2018 and Subaru brings the 2018 Subaru WRX STI with new upgrades to attempt three wins in four years. Subaru finished all domestic preparations for this year's Nurburgring 24-hour race and loaded the STI on a Japan Airlines jet from Narita International Airport this week and it’s headed for Germany.

The 2018 WRX STI NBR machine finished its shakedown at Fuji Speedway for durability testing and a night practice. Subaru Tecnica International (STI) dialed in the suspension, introduced a transmission assembly incorporating the gear ratio of this year specs, and adjusted the turbo pressure control to improve engine feel.

Subaru transported the STI to Narita airport and strapped the race car on a pallet and loaded it in the cargo room of the Boeing 787 airliner prepared by Japan Airlines. It’s ready for final testing when it gets to Germany where it gets ready to run on the legendary Nurburgring Nordschleife track.

STI NBR team director Eiji Tatsumi, who was present for the loading, said, "The test has finished as scheduled and preparations are proceeding smoothly, not only at the Fuji Speedway test but also at the Kuzuo and Ota test courses. So, this year's car has already run about 10,000 km so far in testing and there is no anxiety with the car.”

The 2018 WRX STI NBR race car gets a few upgrades over last years car which didn’t finish the race. Subaru improved the engine performance by reviewing the exhaust layout and optimizing the turbo effectiveness. Subaru Tecnica International (STI) also improved braking performance with the expansion of the front brake diameter. Aerodynamic performance was also improved with new exterior parts. Subaru has about two weeks to get ready for the 2018 Nurburgring 24-hour race. Can they win three times in four years? Stay tuned.