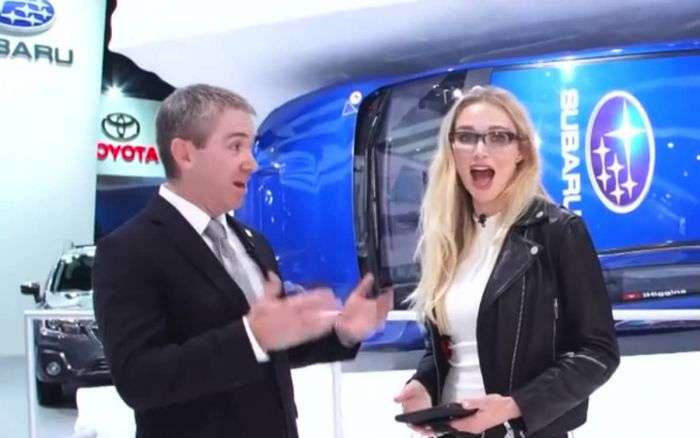 When Alyssa Julya Smith spoke with Alan Bethke, Senior Vice President of Marketing for Subaru of America at the Chicago Auto show, she called the Subaru WRX STI insane. This was the 2018 Subaru WRX STI that went down the St. Moritz Celerina Bobsled Run. The STI is on display at the Chicago show. Alyssa was there with CBT News to talk about the new Ascent 3-Row from Subaru, but she had to ask about the WR Blue STI hanging on the wall display behind her.

Alyssa couldn’t believe Subaru would drive the Subaru WRX STI on a Bobsled run, and when she asked Alan Bethke why they did it, it left her with mouth wide open. Check out the brief interview.

Alyssa: Okay. So before we get to the big unveiling, of course, that Kristen mentioned (2019 Subaru Ascent), we want to talk a little bit about what we're standing in front of. We're standing front of this recreated Ice Toboggan. Tell me about the STI that's behind us right now.

Alan: Yeah. This is crazy. This is a production Subaru STI. It's the same car that you can buy at any Subaru dealership. Earlier this year, this car went down the St. Moritz Celerina Bobsled run. In Europe, the only car ever to go down and then up.

Alyssa: And then up.

Alan: It is insane. It's all wheel drive turbocharged Subaru boxer engine.

Alyssa: So- so tell us about why you do something like that when it comes to safety features. Is this to really test out the safety? I mean, obviously, I'm not gonna be driving a, uh, a Toboggan sled.

Alyssa: But, is it really for a safety kind of check?

Alan: Uh, it- it's safety and performance and capability. It's everything a Subaru with all wheel drive and all of that power and control can do. You can look at this thing and how narrow that gap is of the car and the kind of control that you have to have to get up and down. It's unbelievable.

You can watch the entire interview here. In case you missed it, you can see the 2018 Subaru WRX STI go down the insane St. Moritz Celerina Bobsled run below. Also, watch the Behind the Scenes: Subaru Bobsled Run video.