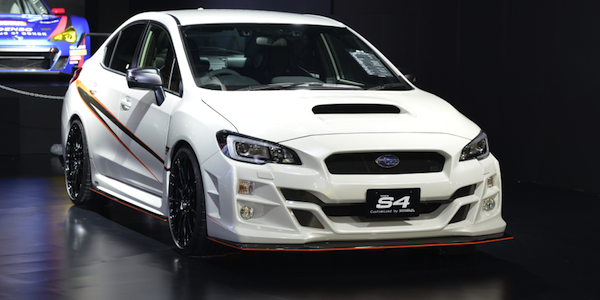 The Tokyo Auto Salon is a place for JDM to showcase their cars that will never make it to other global markets. Subaru brings the 2015 Subaru WRX S4 customized by PROVA to show Japanese performance enthusiasts what they can do to customize the new WRX S4. Subaru has a long history with PROVA and fans were impressed with the customized performance sedan.

If anyone knows how to customize the 2015 Subaru WRX S4 it would be custom tuner and performance auto parts manufacturer PROVA. The custom tuner has been working with Subaru for over 30 years and has the experience and track record to prove it. PROVA has developed a new 2015 WRX S4 and it was a big hit with performance fans at the Tokyo Auto Salon that finished up on Sunday.

PROVA started with Subaru back in 1980 when they started developing high-performance parts for their cars. They began their involvement in motorsports in 1982 in Subaru’s first 4WD race car, a Leone RX coupe, and competed in the Fuji 1000km race. They continued their race activities with Subaru in the N1 endurance, Group A and the Nurburgring 24-hours in the mid-late 80s.

They continue their involvement with Subaru today and produce an entire line of performance parts for the whole Subaru lineup including the new 2015 WRX S4 performance sedan and LEVORG sports tourer. They make everything from lowering springs, carbon fiber exterior parts and sport exhaust systems for the vehicles.

Outside the custom WRX S4 came with a DAMD exterior aero kit, a new rear wing, 10-spoke black Enkei wheels, and Crystal White exterior paint, Inside it featured RECARO performance seats and PROVA sports steering wheel to round out the custom features.

The new 2015 Subaru WRX S4 customized by PROVA was a big draw for performance enthusiasts at Tokyo Auto Salon 2015 this weekend. Check out the video below.