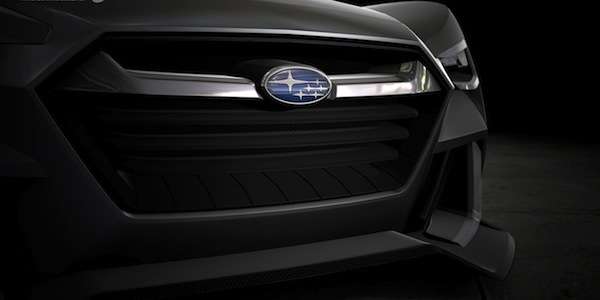 The Subaru VIZIV2 Concept made its global debut at the Geneva Motor Show 2014. See the answer to Vision Gran Turismo by Subaru in this video.
Advertisement

The new Subaru VIZIV GT Vision Gran Turismo is teased ahead of the official release of the two-door grand touring sports car for Gran Turismo 6. It’s much sportier than the VIZIV2 Concept that made its global debut at the Geneva Motor Show in March. And we know it's a plug-in hybrid model from the teaser video below as was the Subaru VIZIV2 Concept.

Leading automakers are involved in the project

But this model was specifically developed for the "Vision Gran Turismo" project in which the world's leading automotive brands design an original sports car in commemoration for the 15th anniversary of Gran Turismo for players of Gran Turismo 6.

The project started from the words of Kazunori Yamauchi who is the founder and producer of Gran Turismo. "Would you be willing to design your rendition of Gran Turismo for us?" The name of the video game “Gran Turismo” means of course, GT, which refers to a two door sports car, a grand touring car in the automotive world.

We know that the Subaru VIZIV GT comes with a new plug-in hybrid electric system that pairs a gas engine with two powerful rear electric motors with vectoring. This is a system Subaru has been working on developing for a future production car. We will likely see this powering a new Subaru SUV in the future.

Another feature we know fits into Subaru’s core beliefs, is the VIZIV GT will likely feature the next-generation EyeSight system with stereo cameras that can detect emerging traffic conditions. The revolutionary system combines with 360-degree sensing for autonomous driving.

What does VIZIV mean?

The new Subaru VIZIV 2 Concept that made its global debut in Geneva followed on the heals of the VIZIV Concept unveiled at last year’s Geneva Motor Show, and “VIZIV Evolution Concept”, revealed at the Tokyo Motor Show 2013. Both models are future design idioms that Subaru is working on for a future production model. The “VIZIV” model name is a word inspired by the phrase “Vision for Innovation.” Now Subaru VIZIV GT Vision Gran Turismo is teased ahead of its official unveiling coming soon.