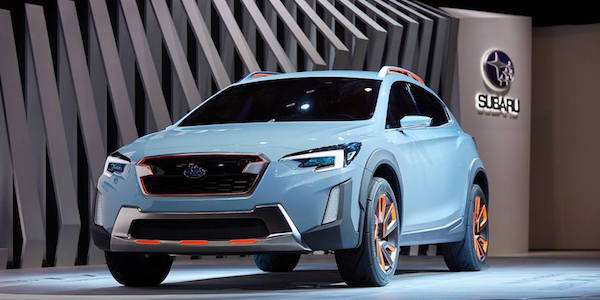 Subaru Targets the Next-Generation Crosstrek to Get Full-Electrification

Electric vehicles are coming to the Subaru lineup, and the the next-generation 2018 Crosstrek will be first to get the new electric drivetrain.
Advertisement

According to a report from Auto Express, Subaru’s next-generation Crosstrek, coming next year, will get a full-electric model. Subaru UK's Marketing director Chris Hawken told Auto Express the next Subaru Crosstrek (XV in the UK) "will have electrification in the range.” The new Crosstrek EV will launch in the next 5 years.

Subaru’s future will also include a plug-in hybrid

Before a full-electric, the Crosstrek will also likely be getting a new plug-in hybrid when it gets a remodel. Subaru discontinued the Crosstrek hybrid and Yasuyuki Yoshinaga, CEO of Fuji Heavy Industries, recently said they already have a hybrid variant on the drawing board.

The auto industry has reached a tipping point and there’s a new global shift to EVs. Subaru will need to comply with the stricter regulations in California by 2018, but it won’t stop there. Yoshinaga said, “We'll be sure to comply with regulations. But at the same time, the overall industry is now shifting its electrification focus toward EVs. We are in the age where we cannot just go on launching EVs only as regulation compliance cars.”

Subaru has said they will develop the technology in-house. They will also need to use outside resources for their batteries and also the electric motor. Subaru could mate the motor for the hybrid model with their new 1.6-liter gas engine they developed for the new Japan-spec 2017 Impreza compact.

The next-generation 2018 Subaru Crosstrek will likely be uncovered in September 2017, at the Frankfurt Motor Show. The new Crosstrek will be coming with a hybrid powertrain and an all-electric to follow in 2021. Stay tuned.