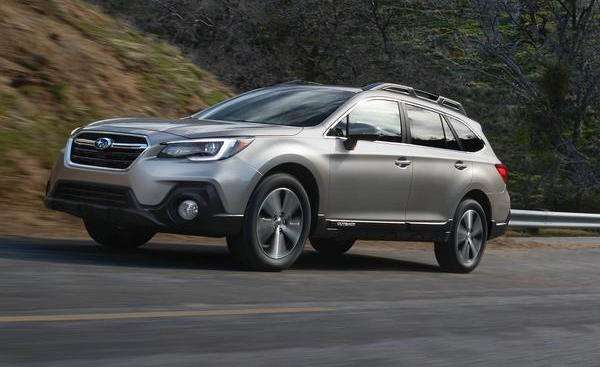 Subaru Outback is Most Likely New Mid-Size Crossover to Go Over 200K Miles; Should You Buy New or Used

Independent studies show the new 2018 Subaru Outback is the most likely new mid-size crossover to go over 200,000 miles. Should you buy new or used?
Advertisement

Subaru says the newly-redesigned 2018 Outback is the longest lasting vehicle in its class. In independent studies by iSeeCars.com and IHS Markit, they both say the new Outback wagon is most likely to take you 200,000 miles and beyond. Should you buy new or used?

It’s not easy to find a low-mileage used Outback because their owners hold on to them for so long. Like a badge of honor, they watch the odometer roll over the 100,000 mile and then 200,000 mile marks and beyond. Then they don’t sell them, they just give them to a younger family member. According to Subaru, 96 percent of all Subaru cars built in the last 12 years are still on the road today. That’s an amazing number when you consider how many older Subarus are still going strong. These numbers are backed by independent studies.

Research by iSeeCars.com is based on listings for 30 million vehicles advertised for sale. Looking at the model years 1981 to 2010, the company ranked vehicles based on the percentage that achieved the impressive 200,000-mile mark. The Subaru Outback was the top vehicle in the mid-size crossover class.

Longevity is also based on research by IHS Markit who conducted a study of U.S. vehicles in operation with registration statistics MY2008-2014 in the Non-Luxury Midsize CUV category as of October 2015. They also took vehicles still in operation for the Non-Luxury Mid-Size CUV and Non-Luxury traditional Mid-Size segments as of October 2016 for model years 2002 to 2016 vs. total new registrations of those vehicles. Outback was also number one on their list.

Other top vehicles for longevity

What other vehicles besides Outback made the top ten list? Another Subaru to make the list is the Legacy sedan. According to iSeeCars, the Honda Accord, Subaru Legacy, Toyota Avalon, Honda Odyssey, Nissan Maxima, Toyota Camry, Ford Taurus, Honda Civic, and Acura TL are the top-ten vehicles most likely to go 200,000 miles. In another study, Forbes says the Forester SUV is also most likely to run for over 250,000 miles.

The Outback wagon is the longest lasting vehicle in its class according to iSeeCars and IHS Markit research. When a low-mileage used Outback goes up for sale, they are snatched up quickly. It’s probably easier to buy a newly-redesigned 2018 Subaru Outback wagon. It’s expected to take you 200,000 miles and beyond.

For Some Former Daimler Managers Daimler Is Authority, While Tesla Is Like a Startup
How Daimler Unintentionally Subsidizes Tesla Giga Berlin
END_OF_DOCUMENT_TOKEN_TO_BE_REPLACED