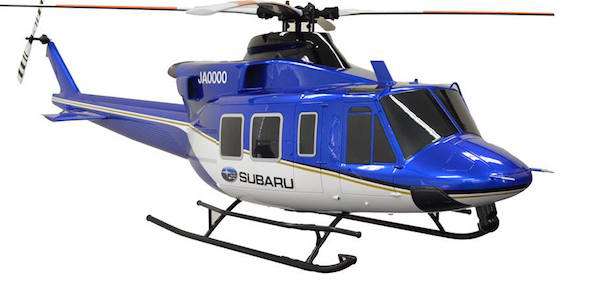 Subaru Now Produces a Remarkable New WRX STI Rally Blue Chopper, How Will it Benefit You?

Why is Subaru producing helicopters? They now have two. What difference does it make for you a car buyer?
Advertisement

Why is Subaru making a new WRX STI Rally-Blue chopper? If you didn’t know it, Fuji Heavy Industries (FHI), maker of Subaru automobiles and the all-new 2017 Impreza, has a manufacturing division for the aerospace industry. FHI will be changing their name next April to Subaru Corporation, and this new change will further enhance their aerospace business. How does this affect you as a car buyer?

What’s their aerospace business about?

FHI will become Subaru Corporation and it will further drive the brands identity. They will continue to make parts for Boeing, helicopters, aviation business jets and industrial power products. They also have an Eco Technology Division that manufactures garbage trucks, robot sweepers and wind turbines.

Subaru will display their new helicopters at the Japan International Aerospace Exhibition 2016, October 12-15 in Tokyo. The main exhibits will be dynamic displays featuring large-scale models of the UH-X utility helicopter that FHI is currently developing for the Japanese Ministry of Defense in a joint international project with Bell Helicopter in Texas. They will also bring the advanced variant of the 412EPI helicopter, which provides the military platform for the UH-X.

How will this benefit you?

Subaru’s parent company will gain new information that can be shared with their automotive division and their performance and motorsports division, STI. The best example of how FHI uses what they learn from their aerospace division, is their revolutionary horizontally opposed boxer engine which applies this technology to their Subaru vehicles. FHI has committed to maximizing the advantages of its Boxer engines and has continued to enhance them to power its vehicles since 1966.

Subaru is also the leader in automobile safety which also directly benefits car buyers. Subaru makes some of the safest vehicles on the planet and they continue to develop the new technology. What makes the brand so successful, is the fact that FHI shares technological advancements with their automobile division Subaru. The Japanese automaker has a great deal of technological and financial resources to draw from. Many of the advancements that went into the new 2017 Subaru Impreza, FHI learned from the aerospace industry. Their aerospace division learned what colors are the best. It came from Subaru’s motorsport division, STI who produced the World-Rally Blue WRX performance car.