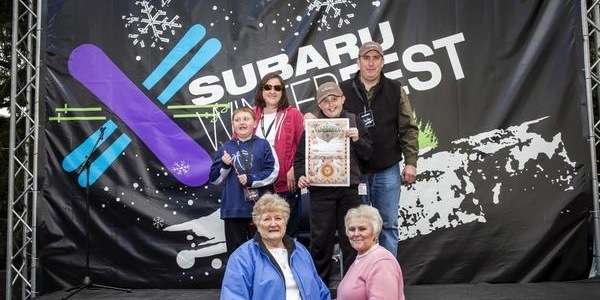 This month, Subaru and Make-A-Wish Utah made an 11 year-old boys wish come true. His name is Derek and he gets to go fishing in Alaska.
Advertisement

Some businesses provide their customers with products that make their lives better, and some touch a persons heart and make their deepest wish come true. That’s what Subaru of America (SOA) has been doing for the past four years by partnering with the Make-A-Wish organization.

This month, Subaru and Make-A-Wish Utah made an 11 year-old boys wish come true. His name is Derek and he was diagnosed with liver failure. The 11 year-old boy gets to go fishing in Alaska with his family this spring. It was all made possible because Subaru is a supporter of Make-A-Wish.

Derek finds out through a surprise reveal

During a surprise wish reveal ceremony at Subaru WinterFest event at Snowbird Ski and Summer Resort, UT, Derek learned his number one wish would come true. SOA said, “As a proud supporter of Make-A-Wish, Subaru is honored to sponsor this wish for such an inspirational and resilient child.”

CHECK OUT: How this Galaxy Blue Pearl Subaru WRX set a huge milestone

At the ski event in Utah, Derek found out about the Alaska fishing trip through clues that “popped up” around the Snowbird Village. He was excited when he found out that he and his family would be venturing to Alaska to see mystic-blue glaciers and catch salmon this spring.

Subaru has made 610 wishes come true

Subaru of America has been a sponsor of Make-A-Wish and has donated more than $4.5 million to help make more than 610 wishes come true during the last four years. The Make-A-Wish organization brings hope, strength and joy to children with life-threatening medical conditions. The organization has been making wishes come true for 35 years and has granted more than 254,000 wishes to deserving kids across the country.

Prior to finding out about getting his wish-come-true Alaska fishing trip, Derek and his family were treated to a ski weekend at Snowbird that included a private ski lesson and use of the facilities at the Snowbird Ski and Summer Resort in Utah. This was all made possible courtesy of Subaru.
You can watch Derek’s wish reveal on “World of Adventure” airing February 21 at 5pm ET on NBC. An extended version of the wish reveal, in addition to more of Derek’s story, will be released digitally after the show airing on The World of Adventure TV.