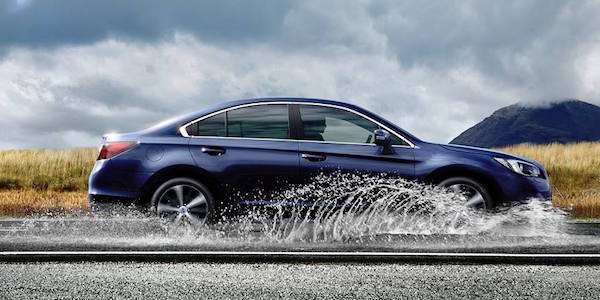 Kelley Blue Book picks the best affordable new sedans in the 10 Best Sedans Under $25,000. Why did they pick the 2016 Subaru Legacy?
Advertisement

2016 Legacy sedans also get new auto on/off mode that operates the windshield wipers with the headlights. Subaru engineers retuned the electric power-assist steering on the new Legacy to provide “an even more linear and natural feel.” The 2016 Subaru Legacy gets a more refined ride over the outgoing model.

The mid-size 2016 Subaru Legacy 2.5i has a starting MSRP of $21,745 not including destination. It comes with a 2.5-liter four-cylinder boxer engine producing 175-horsepower, standard all-wheel-drive, Lineartronic CVT with 6-speed manual mode with paddle shifters and gets 26/36 city/highway mpg.

The 2016 Subaru Legacy sedan makes a splash in Kelley Blue Book’s “Best Sedan Under $25,000”. It’s one of ten that’s affordable, has standout features and is fuel efficient. It also comes standard with all-wheel-drive that sets the Legacy sedan apart.