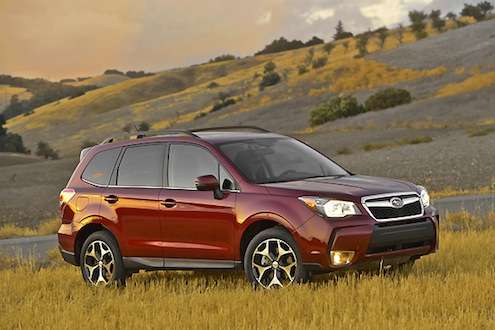 The all-new 2014 Subaru Forester has helped Subaru reach a new level of EyeSight safety system sales never achieved by the brand before.
Advertisement

Subaru has done a great job of marketing their new safety system called EyeSight, and the new 2014 Subaru Forester has helped the brand achieved a new level of accumulated sales of EyeSight-equipped models. Subaru announced today that the accumulated sales of the EyeSight-equipped models surpassed 100,000 units in Japan with the 106,735th model sold at the end of March 2013. And the new 2014 Forester leads all models sold after November 2012 in models equipped with EyeSight. Why are so many buyers choosing the new Forester with the safety system?

The new safety system has been popular with buyers around the globe and Subaru's original advanced driving assist system was first introduced in May 2010. It started last year with the introduction of the new XV Crosstrek. 82.3 percent of XV Crosstrek buyers chose the new safety system which includes Pre-Collision Braking System, Pre-Collision Brake Assist, Pre-Collision Throttle Management, Adaptive Cruise Control, Lane Sway and Departure Warning and Lead Vehicle Start Alert. Is the trend continuing with the new Forester?

It’s been so popular that EyeSight-equipped models account for as much as 70% of the total volume of the EyeSight-available models (Legacy, Impreza, Forester and Exiga) sold in Japan during 2013. The completely redesigned fourth-generation Forester leads all Subaru models with 88.8 percent of the crossovers being equipped with the safety feature.

Following the new Forester, the Subaru Exiga is the next model for the brand that is EyeSight-equipped with 82.7 percent, followed by Legacy models 81.8 percent, and the Impreza with 54.2 percent. Since its first introduction in Japan, the EyeSight safety system has been highly praised due to its superior functions and affordable price. Subaru has been committed to safety for decades and the system further enhances the brands technologies. Safety in all Subaru’s actually begins before the design phase.

The technology will continue to evolve

Fuji Heavy Industries, the parent company of Subaru says, their goal is to provide "Enjoyment and Peace of Mind" in every vehicle they build. They go on to say, “This is not possible without the crucial element of "safety". Subaru will pursue all-around safety by enhancing its active, passive and pre-crash safety technologies. FHI will continue to develop the EyeSight as an important item of the safety technologies.”

With the new EyeSight safety system, Subaru has developed technology that will continue to evolve and grow over time. They will be able to add new partners and connectivity capabilities and give consumers the type of technology they are looking for. The all-new 2014 Subaru Forester leads the way for all models equipped with the new system.

Watch the Subaru EyeSight overview video below to see the safety system in action.