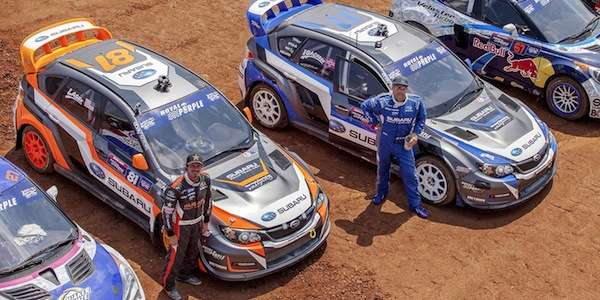 Subaru confirms Lasek, Isachsen and Pastrana are back for 2015 GRC

Svere Isachsen and Bucky Lasek will contend the full 2015 GRC season, while Travis Pastrana will join the team at select rounds in the Subaru WRX STI.
Advertisement

Fans are hoping they will get to see the new-generation 2015 Subaru WRX STI GRC car that was unveiled last year at the New York International Auto Show at this year’s Global Rallycross races. We do know that Svere Isachsen and Bucky Lasek will drive for Subaru again this season. Travis Pastrana will join the team at select rounds and his schedule will be announced at a later date.

Subaru announced that Lasek and Isachsen have renewed multi-year contracts with SRT USA and will compete in the full 2015 Global Rallycross Championship season and Summer X games. Last year, the duo competed well for Subaru and had their most successful season to-date. In the GRC series, they earned a combined five podiums including an X Games Silver Medal by Lasek and victory at the Seattle, WA round for Isachsen.

CHECK OUT: Subaru "mystery" hatchback prototype seen testing in the US

Vermont SportsCar has had official support from Subaru of America since 2005. In 2006 together they created Subaru Rally Team USA. Vermont SportsCar handles all facets of the team, including the build of the team rally cars. The team rally cars are built nearly entirely in-house, including the shell prep, roll-cages, engines and many of the composite parts.

Red Bull Global Rallycross will feature a 12-race schedule and will be returning to NBC for the 2015 season, with 14.5 hours of original content, an increase of 4.5 hours from the 2014 season. Broadcast dates and times will be announced shortly before the series.

GRC fans want to see the all-new 2015 Subaru WRX STI Global Rallycross car unveiled for the 2015 Red Bull GRC season. Will Lasek and Isachsen be driving the 2015 STI when they start the season May 31? Stay tuned.