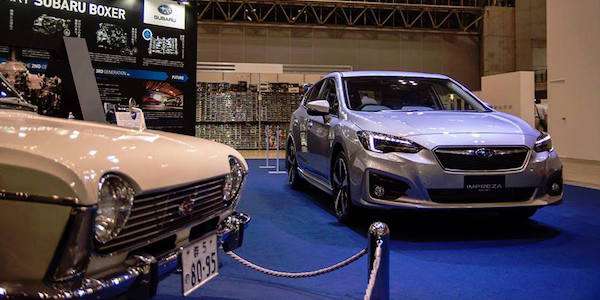 Subaru is celebrating Boxer’s 50th anniversary. The engine was on display along with the new 2017 Impreza at the Automobile Council 2016.
Advertisement

The Subaru brand is unique in a number of ways. The Japanese automaker was born out of an airplane maker, and they use the Boxer engine in all their vehicles. Subaru brought their new 2017 Impreza and a classic Subaru 1000 to the 2016 Automobile Council show. The show took place at the Makuhari Messe event complex 30 kms east of Tokyo.

It’s the 50th anniversary of the Subaru Boxer engine and the Japanese automaker is the only automaker to use it in their entire lineup of vehicles. Along with plenty of new technology, it’s still the engine that will powers the new 2017 Subaru Impreza.

Subaru’s signature Boxer engine was introduced in the Subaru 1000 compact passenger car on May 14, 1966. Since then, it’s been a productive workhorse for the brand and its total production over the past 50 years now tops 16 million units. The all-new 2017 Subaru Impreza will be powered by a new-generation 2.0-liter horizontally-opposed boxer engine.

Toyota, Nissan, Honda and Mazda were also there

Along with Subaru, Toyota, Nissan, Honda and Mazda were also there, under the theme, “Classic Meets Modern.” Mazda had their rotary engine, Toyota brought the 1966 Corolla, Honda shone a spotlight on its 53-year-old S360 sports car concept, and Nissan applauded 50 years since it merged with the Prince Motor Company. Nissan featured the new 2016 Nissan GT-R high-performance car alongside the 1964 Prince Skyline GT which finished second behind a Porsche in the second Japanese Grand Prix.

Born out of an airplane maker

Subaru is unique in that it is the only Japanese automaker to have been born out of an airplane manufacturer, the Nakajima Aircraft Company. Nakajima Aircraft’s 14-cylinder airplane engine was also on display. They were at the show celebrating their centennial next year.

mckillio wrote on August 11, 2016 - 4:18pm Permalink
I don't believe the new engine is a new generation, it's just been upgraded.