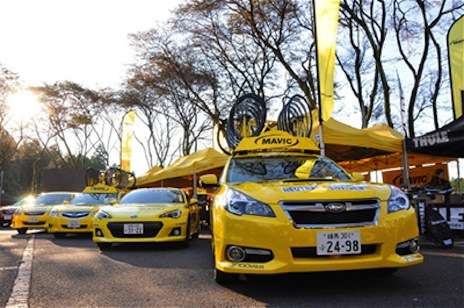 Yellow may not be your favorite color, but you won’t be able to miss the 2013 Subaru BRZ, Legacy and 2014 XV Crosstrek Hybrid models that are on the road in Japan. The special yellow Subaru’s are supporting the 2013 Japan Cup Cycle Road Race. 124,000 fans will gather to watch the bicycle race that will wind through Japan.

Subaru is providing four of the cars for race management and over forty cars will be involved in the race. Fans won’t be able to miss the bright yellow Subaru’s as they navigate the course following the riders. Subaru should get lots of exposure for their newest vehicle, the 23014 XV Crosstrek Hybrid, first hybrid offering from the company.

The new hybrid XV comes with fuel-saving technology and newly released features that set it apart from the standard XV model. The new 2014 XV Hybrid will feature Subaru’s excellent Symmetrical all-wheel-drive system and 8.7 inches of ground clearance for off-road capability. But the new hybrid model will also get a few new features for the chassis, exterior and hybrid system to enhance driving dynamics and ride quality.

The yellow Subaru’s will follow the riders as they run through at a speeds of 80km / h or more downhill around the curves. The XV hybrid will be one of the competition vehicles traveling without delay to the bicycle racers. The cars will be used in the loading of equipment such as spare bicycles, and extra wheels for mechanical trouble shooting. The XV Crosstreks cargo carrying ability and high running performance will come in handy.

As Subaru supports the 2013 Japan Cup Cycle Road Race, fans won’t be able to miss the new bright yellow 2014 Subaru XV Crosstrek Hybrid along with the BRZ, and Legacy chase cars. Subaru knows how to get attention and great exposure for their new vehicles.

LG's New EV Battery Plant Is a Welcome News for Tesla
Tesla Giga Berlin's New Hurdle: It's Not Only the Gov't, but Now Tesla Itself
END_OF_DOCUMENT_TOKEN_TO_BE_REPLACED