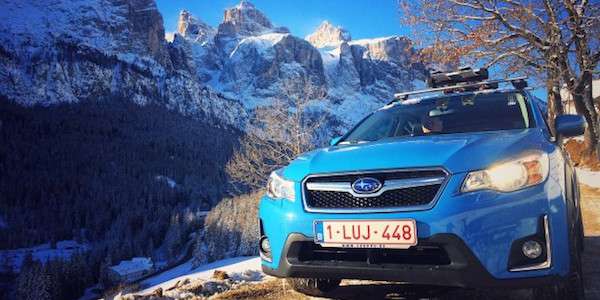 Subaru Builds the New Crosstrek for Urban Adventure-Seekers; Offtrax Shows You Why

Why is the new Subaru Crosstrek built for urban adventure-seekers? Our Canadian Offtrax friends show you why.
Advertisement

Subaru built the Subaru Crosstrek crossover utility vehicle (CUV) for urban adventure-seekers like our Canadian Offtrax friends. The duo took the Crosstrek CUV on another trek, but this time it’s not in the desert heat and sand. It was a winter adventure that took them to eight European countries and eight challenges in the snow. It’s called the Subaru XV Winter Challenge. It’s why Subaru built the Crosstrek.

This is the same Canadian two-woman, amateur team that took on the grueling Maroc Challenge in a Crosstrek last year. They also successfully completed an on-and off-road adventure making a 21,700-mile trek from London to Ulaanbaatar, Mongolia and back again in the same Subaru a year earlier.

This time, they said, “It’s time to try something new”, so they put down their surfboards and picked up ski poles. Corinne Copreni and Jess Watt, packed a new Subaru Crosstrek with gear, drove 4100 kilometers (2,548 miles) on icy roads in eight European countries, and then took on eight snow-packed challenges. They pulled off the expedition throughout the Alps in four weeks. It’s what urban-adventurers do right?

In this Subaru XV Winter Challenge, they spent more time out of their Crosstrek than in it. The Canadian Offtrax team went zip-lining down a black diamond ski run, went snowshoeing in deep snow, went biking on snow, sledding on the longest run in the world, ice climbing, cross country skiing, paragliding off a snowy mountain, and finished by learning how to ski backwards.

This is why Subaru built the Crosstrek CUV. They designed it for urban adventure-seekers who want to experience more thrills from life. It’s got extra ground clearance for off-roading, all-wheel-drive all-weather capability, hatchback utility, and has a go-anywhere attitude like the urban-adventurers that buy the vehicle. The CUV will get you out of the city and away from civilization.

The latest Subaru XV Winter Challenge was in a new Hyper Blue Subaru Crosstrek and not the same crossover they pulled off the Maroc Challenge in. That vehicle is waiting for the next challenge, which will be a long distance rally covering more than 10,000 km with a much less pre-planned route. It’s why Subaru built the CUV. Stay tuned.