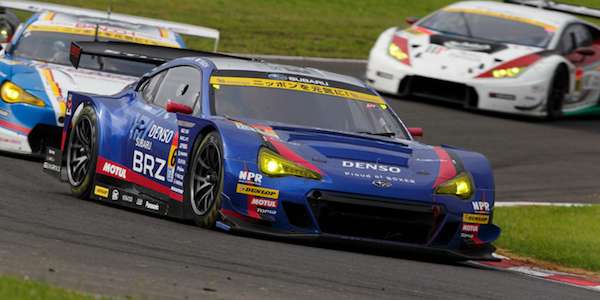 The Subaru BRZ GT300 overcame a crash in qualifying to reach the podium at SUGO Sportsland.
Advertisement

It was a scary scene as the Subaru BRZ GT300 race car slid off the track during qualifying and hit the barrier. The sports coupe limped back to the STI garage and repairs were made on Saturday. The Subaru Tecnica International crew worked feverishly to get the recently revamped car ready for race day on Sunday. Even with the crash, Subaru qualified as the third fastest for the race at SUGO Sportsland this weekend. Scroll down to watch the qualifying crash video below.

Round four of the SUPER GT Series started on Sunday with fog, clouds and rain. The skies cleared and the pre-race practice race was on. Once the race started, the track was dry and the tires on the BRZ GT300 race car were heated up from the 10-lap practice session.

BRZ gets off to a good start

Hideki Yamauchi, was the starting driver, and pushed hard in the first corner to overtake a car and immediately moved into second place. He kept the position for 30 laps until the safety car came out following a crash. The BRZ came in for a pit stop to refuel and replace the tires. Time was lost after the BRZ got the new tires all around.

Takuto Iguchi, came in for the remainder of the race and entered the course in 13th place overall after the pit stop. He passed slower cars and made it up to fifth place as the BRZ performed well. Another stop was made as all the cars made pit stops one after another. The BRZ kept up the fast pace and moved up to rejoin the leaders. At the first corner of the 66th lap, the BRZ sports coupe was in third place when another accident occurred behind the leaders.

The red flag comes out

With just six laps to go, the red flag came out the cars held their positions as the race cars slowed to finish the race. The BRZ GT300 was in third place and gets a podium finish for the first time this season. STI won the third place podium for the first time since the fifth round at Suzuka circuit in 2015. The Subaru BRZ GT300 overcame a scary crash in qualifying to reach the podium at SUGO Sportsland. The next round in the SUPER GT will be held on August 6 (Saturday), 7 (Sunday) at Fuji Speedway.

Watch the qualifying crash video below