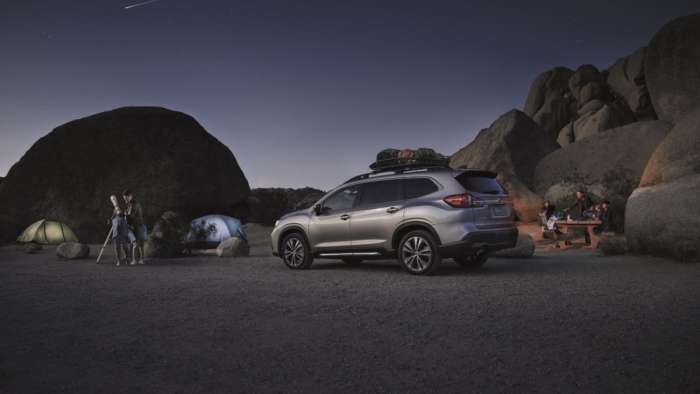 Subaru Ascent; Is Its Small 2.4L Engine Big Enough To Haul Your Family?

The all-new 2019 Subaru Ascent is powered by a small 2.4-liter engine. Is it big enough to haul your family?
Advertisement

Consumers looking for a 3-Row family hauler have another choice now that Subaru has built the largest vehicle ever. The all-new Subaru Ascent family hauler arrived last year, but it’s powered by a small 2.4-liter Boxer engine. Does Ascent have enough power to haul your family up the mountain and over the pass to the ski areas?

Subaru engineers configured the Ascent 2.4-liter Boxer engine to provide maximum torque at low RPM, providing brisk acceleration when merging onto a freeway or towing a trailer. Yet according to EPA estimates, Ascent can deliver up to 27 mpg while still producing 260-hp and 277 lb. ft of torque, using regular unleaded gasoline.

Subaru was the first automaker to recognize the potential of using small turbocharged engines in mainstream vehicles like the first 1983 GL Wagon. ProDrive, Subaru and Subaru Tecnica International, Subaru’s motorsports partner, developed turbocharging in its performance Impreza and then Impreza WRX on the rally stages. They then went on to incorporate the technology into their daily drivers.

Where Subaru really made its reputation, though, was combining turbocharging with their Symmetrical all-wheel-drive system. The Japanese automaker has perfected the combination of a small Turbo Boxer engine combined with all-wheel-drive. This is what customers get in the new 2019 Ascent family hauler.

When Torque News drove the new Ascent in Colorado's mountains for a week, this is what we found. “We were surprised at the 2.4-liter four-cylinder engine’s power in our high-altitude driving. It’s 260 horsepower doesn’t sound like a lot, but the 277 lb-ft of torque gets this large SUV moving. We pushed the 3-Row vehicle hard up I-70 heading west into the mountains and had no problem passing and making spirited maneuvers. The Ascent feels sure-footed and the all-wheel-drive offers all-weather capability.”

“The technologies of turbocharging and direct fuel injection work well together, allowing manufacturers to make a smaller engine for improved performance, better fuel economy or both,” says Todd Hill. Subaru Carline Planning Manager. Subaru goes back to their past to produce the largest vehicle in their lineup. The small turbocharged 2.4-liter Boxer engine produces enough grunt to haul your family up a mountain pass and won’t leave you wanting for more power.