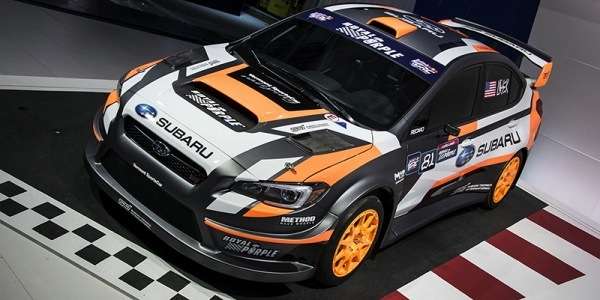 Yoshio Hirakawa, President Subaru Tecnica International Inc. (STI), introduced the new Subaru BRZ STI Concept at NYIAS, but motorsport fans will want to watch the new 2015 WRX STI Global Rallycross car. STI is stepping up their motorsports involvement in the U.S. and their expertise will show up with SRT USA’s GRC STI race car in 2015.

Hirakawa told the press that STI’s top priority market is the U.S. and one of the areas of focus will be to get SRT USA’s 2015 WRX STI Global Rallycross cars on the podium more this year. STI has plenty of experience in motorsports and began with Subaru back in 1988. Hirakawa said, “I have spent thirty years, in the development of Subaru cars. As a result, I know everything about Subaru cars from their basic performance to their highest capabilities.”

STI is currently involved with motorsports in Japan with the 2015 Subaru BRZ GT300 in the SUPER GT series and they also run the 2015 Subaru WRX STI at the Nurburgring 24-hr race. Now they are turning their attention to the U.S. and bringing their technical knowledge to Subaru’s U.S. GRC race program.

STI has something to prove in the tough arena of Global Rallycross. SRT USA has made progress in GRC, STI hopes to take the cars to the next level. Yoshio Hirakawa went on to say, “We are very proud of our engineering capability at STI, and we like to prove this in our motor sports activities. In the US, STI has been promoting these activities in cooperation with Subaru of America for Global Rally Cross and for Rally America. We hope you continue to watch STI-engineered vehicles compete in these very tough races and watch our future developments here in the U.S.”

With the new 2015 WRX STI GRC car being unveiled at the New York International Auto Show, SRT USA is hoping STI’s involvement will make a big difference in their third season of Global Rallycross. Rob Weir, Subaru Motorsports Marketing Manager said, “STI is increasing their support of our U.S. based efforts in rallycross. Their expertise and development resources will take our program to an even more competitive level.”

Weir said SRT USA’s Global Rallycross program won’t be satisfied with just getting to the podium in 2015. Weir went on to say, “Our goal in 2014 was getting to the front row of every final and being on the podium. This year, our only goal is winning.”

GRC’s Chris Leone caught up with Bucky Lasek at NYIAS at the unveiling of the 2015 Subaru WRX STI GRC race car. Lasek told him in an interview, “I’m going into the season to win races, and then from there I’ll go on to fight for the championship. GRC is one of the most aggressive racing series there is today and that’s the mentality you need to stay in front.”

The new 580 hp 2015 Subaru WRX STI GRC race car will make its track debut at Red Bull Global Rallycross May 31 in Ft. Lauderdale, FL. STI’s stepped up involvement will be needed to keep up with Ken Block and the other top GRC rivals. Stay tuned.