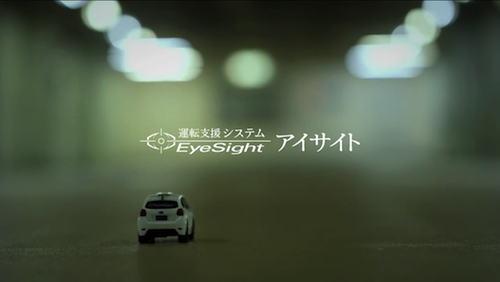 See what happens when dozens of Subaru XV Crosstreks use EyeSight

Watch what happens when dozens of miniature 2013 Subaru VX Crosstreks fitted with Subaru’s new EyeSight safety function take their different routs all at once.
Advertisement

Subaru has been known for having some great ads and is being recognized for a video they produced last year. The video is called "minicar music player" and shows just how well their new safety system called "EyeSight" works. It shows dozens of Subaru XV Crosstrek miniature cars using the safety system driving all over a parking garage without one crash. The video was produced to introduce the function of Subaru's original advanced driving assist system "EyeSight" and has won the Gold award in
"The 2013 One Show Design Awards" on May 6th in the U.S.

This year they had another great video called “Twinkle Twinkle Six Flags” that was a brilliant acoustic masterpiece that drew over 1 million views. Their newest creation expresses the EyeSight's "Pre-Collision Braking Control" function for avoiding collision or reducing collision damage by using a movie of many miniature cars making sounds. This is the sequel of the first Subaru miniature cars' video "The walk of minicar" which has been uploaded on their main website in August of 2012.

One Show Design is a non-profit organization in the US, founded in 1975 and recognizes advertisers for outstanding work every year. It “aims to champion and promote excellence in advertising and design in all its forms.” The One Show is one of the three major international advertising, design and communications competitions along with "The Cannes Lions International Festival of Creativity" and "The CLIO Awards".

Subaru has done a great job of marketing their new safety system, and accumulated sales of EyeSight-equipped models surpassed 100,000 units in Japan with the 106,735th model sold at the end of March 2013. The new safety system has been popular with buyers around the globe and Subaru's original advanced driving assist system was first introduced in May 2010.

See what happens when dozens of miniature 2013 Subaru XV Crosstrek cars fitted with the EyeSight function take their different routs all at once.