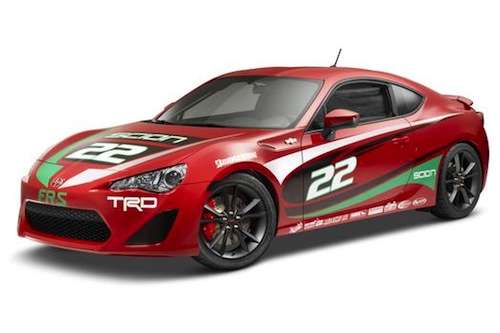 The new 2013 Scion FR-S is already an icon with its fans and is now a race-ready model that will be the official race vehicle for the 2013 Toyota Pro/Celebrity Race.
Advertisement

Fans of the new 2013 Scion FR-S will be thrilled with what Toyota has done to the rear-drive sport coupe. Toyota Motorsports and Scion announced that the Scion FR-S sports coupe will be the official vehicle of the 2013 Toyota Pro/Celebrity Race. This is a dream come true for fans of the two-door sport coupe who have been wanting a faster version of the car that was co-developed along with the Subaru BRZ. The new race car could be a preview of what Toyota has in mind for future production models of the Scion FR-S and the global Toyota GT 86.

The first Pro/Celebrity race-ready FR-S will make its world debut at the Chicago Auto Show. The newly modified car was produced by Toyota Racing Development (TRD) and a video below shows the development of the race car. "The transformation of the FR-S into a race vehicle is a dream come true for many die-hard FR-S fans, and we wanted to share the journey with consumers at the Chicago Auto Show," said Doug Murtha Scion vice president.  “Scion vehicles have been driven in the Pro/Celebrity race vehicle since 2005, and we can’t wait to see the rear-wheel drive FR-S race around the historic street course.”

The Scion FR-S race car marks the first time in 27 years that a rear-wheel drive sports car will serve as the designated race car. Twenty five examples of the race-ready car will be produced, and the build video below shows the Toyota Racing Division transforming the stock FR-S into a race vehicle. The Toyota Pro/Celebrity Race will take place April 20 and marks the 37th anniversary of the charity event held annually as part of the Toyota Grand Prix of Long Beach weekend.

The Scion FR-S gets performance upgrades

The Toyota Pro/Celebrity race has evolved into one of the longest-running corporate-sponsored fundraising events of its kind, pitting celebrities from music, sports and film against professional race drivers. The event benefits “Racing for Kids,” a nonprofit, national fundraising program that supports children’s hospitals throughout the United States.

The all-new 2013 Scion FR-S is wildly popular in the U.S. along with the Toyota GT 86 around the globe. It was launched last summer and has received many global awards including being named Best of 2013 Cars.com, earning a spot on Car and Driver’s Ten-Best List 2013, and winning the first-ever Car of the Year award from AutoGuide.com. Scion FR-S fans can get excited about this new race-ready car developed by TRD. It could signal a new production FR-S high-performance model coming in the future.

Watch Readying the Scion FR-S for the Toyota Pro/Celebrity Race video below: