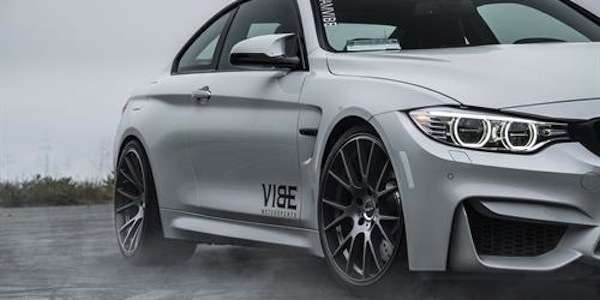 The 2015 BMW M4 gets some new wheels at Bimmerfest 2015. Who is RSR and how does this improve the M4?
Advertisement

Bimmerfest was held at Auto Club Speedway in Fontana, Calif., on Saturday, May 23, highlighting the VIBE Motorsports-modified M4, and was shown during the biggest BMW party in the country.

RSR partnered with VIBE Motorsports based in Sun Valley, Calif, to create a modified 2015 M4 that was shown for the first time in the U.S. VIBE tuned the M4 with an aftermarket exhaust by BORLA, providing even better horsepower and sound.

According to Bill Koenig, executive vice president for MKW and RSR, these RSR wheels provide luxury sport vehicles like the M4 a completely new edge. “Over the past six months we’ve benefitted from the significant increase in demand for the light-weight, race-type of wheel that enthusiasts’ desire,” said Koenig.  “Our flow form wheels are generating a buzz especially within the popular BMW crowd and we’re providing a motorsport look for popular cars like the M3 and M4.”

DON’T MISS: The coolest BMW coupe ever that will never make it to production

RSR stands for Road, Street and Race. The wheels allow for big brake upgrades and larger brake calipers. For racing, RSR uses high tech, lighter weight, forged aluminum and custom-built wheels. They take a cast aluminum wheel and lighten it by 30 percent. RSR’s race version 801 Series will be ready for delivery in 2016.

For more information on RSR’s radical new wheels for your 2015 BMW M4 go to roadstreetrace.com