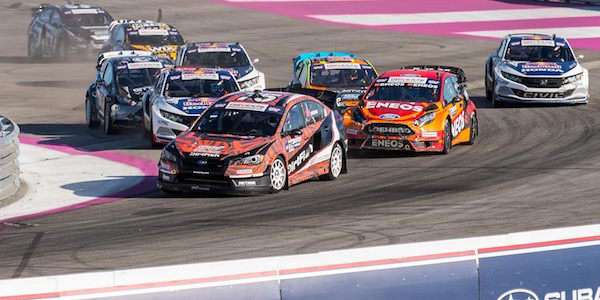 Red Bull Global Rallycross will launch an EV race series in 2018. Is it a sign of things to come?
Advertisement

Motorsports is a good gauge of coming trends, and Red Bull Rallycross is paving the way for all-electric vehicles. In a surprise announcement, Red Bull Global Rallycross says they will begin a new all-electric vehicle series staring in 2018. This will be a “distinct stand-alone” race series to go along with the Supercar and GRC Lites classes in the series’ race program. Are you ready for an all-electric Subaru WRX STI? One could be sitting in your garage sooner than you think.

GRC appeals mainly to the millennial generation (age 18-35) and this is the target group with the new EV race series. Red Bull GRC CEO Colin Dyne says, “Our current platform is the most enticing in motorsports right now to a young, millennial audience. Our small displacement, high-horsepower, turbocharged engines allow our manufacturers to showcase the performance capabilities of their current millennial-focused offerings, and provide a glimpse into the exciting future of the automotive industry.”

While full-electric cars are still a small fraction of total global auto sales (less than one percent), the pendulum may have reached the half way point and there’s no stopping it now. The wholesale embracement of electric vehicles is not being driven by consumer demand but by circumstance, politics and regulation. Automakers around the globe seem to have reached the point where they have accepted the inevitability of a future that is substantially electric. It's coming to GRC soon.

The potential for eco-performance starts on the grid

Petrol heads will need to get used to it, because the future is taking shape and motorsports is where it will become widely accepted. It’s potential for eco-performance will pave the way for race fans to accept the new technology. While it’s hard to imagine an all-electric Subaru WRX STI, one sitting in your garage is not that far from reality.

It hasn’t been announced if the current four Supercar class manufacturer partners Ford, Subaru, Honda, and Volkswagen will participate in the new EV race series. Dyne says the new EV class won’t replace the gas-powered Supercars that provide the action-packed excitement now, but he says “It will be an important part of our expansion.”

Red Bull GRC, in conjunction with USAC (United States Auto Club), will serve as the governing body for the new EV race series. Dyne says, “The 2018 season will be a landmark year for us as we welcome electric vehicles to the grid for the first time.” An all-electric Subaru WRX STI could be coming sooner than anyone ever imagined.