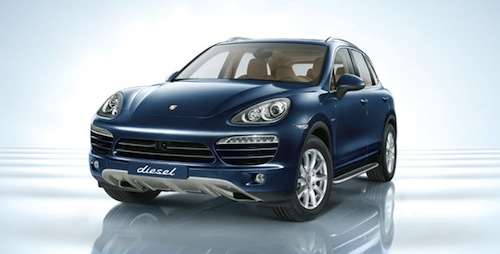 The 2013 Porsche Cayenne is offered with a new V6 diesel here in the U.S. and has been given an award from Popular Science for its innovation and efficiency.
Advertisement

The new 2013 Porsche Cayenne Diesel has only been on sale here in the U.S. since September, and it’s already getting recognition for its power and efficiency. The new Diesel SUV from Porsche has been honored for its innovation and efficiency by Popular Science and has been selected for the 2012 "Best of What's New" honor. The Porsche Cayenne Diesel has been sold overseas since 2009 and the Europeans have known about its performance, power and fuel efficiency for some time now. The Cayenne Diesel, the first diesel-powered SUV ever offered by Porsche, made its U.S. debut at the New York International Auto Show in April.

The Porsche Cayenne has been important for the financial health of the German automaker here in the U.S., and is the company's best-selling model ever. The luxury SUV accounts for 44.7 percent of the the brands total U.S. sales. And during its first month on sale, the Cayenne Diesel accounted for nearly 20 percent of all Cayenne sales in the U.S. Americans are getting up to speed with the Europeans and are realizing just how efficient the new diesel technology is.

The new 2013 Porsche Cayenne Diesel is powered by a 3.0-liter V6 turbo-diesel with 240 horsepower and 406 lb ft of torque. Porsche says the V6 diesel will sprint from 0-60 in 7.2 seconds with a top track speed of 135 mph. The new 2013 Cayenne Diesel can travel up to an estimated 740 miles on a single tank of fuel. The Cayenne Diesel gets an EPA estimated 20/29 city/highway mpg fuel mileage.

The turbocharger in the new Cayenne Diesel features Variable Turbine Geometry (VTG). The turbo channels fuel into turbines via electronically adjustable guide vanes and can achieve the optimum fuel-flow characteristics. As a result, even at low engine rpms, the turbine speed is maximized for a significant increase in boost pressure, and helps generate greater power and torque.

More awards for the Porsche Cayenne

We hope Porsche brings the new Cayenne S Diesel V8 here to the U.S. The Cayenne S Diesel will be powered by a 4.2-liter V8 turbocharged engine producing 382 horsepower and a massive 626 lb ft of torque. That is a huge increase of 142 horsepower and 220 lb ft of torque over the 3.0-liter V6 Cayenne Diesel. Unfortunately, U.S. buyers won’t be seeing the new diesel V8 anytime soon. With the stringent EPA standards here in the U.S., it may take a few years for Porsche to get the new powerful diesel V8 approved here in the U.S.

For now, the 2013 Porsche Cayenne Diesel V6 is available here in the U.S. with an MSRP of $55,750. As more Americans find out the advantages of clean diesel technology, the Cayenne Diesel will continue to sell well and receive more awards like the 2012 "Best of What's New" honor.