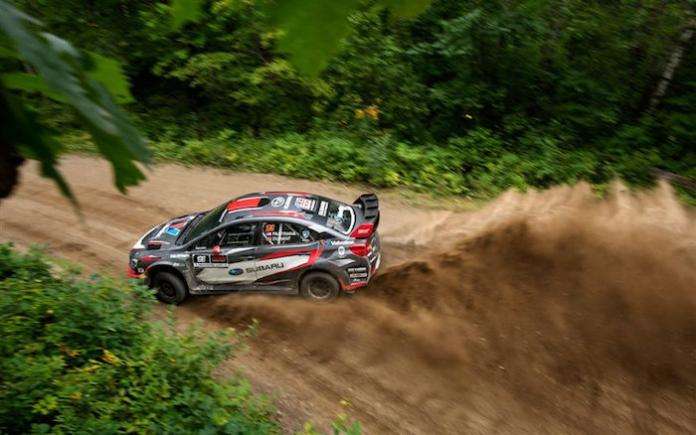 In the Subaru WRX STI battle Pastrana narrowly beats Higgins for the ARA Championship. It was another thrilling finish.
Advertisement

It all came down to the Ojibwe Forests Rally, at Detroit Lakes, Minnesota, the final rally of the inaugural American Rally Association season. David Higgins and Craig Drew in the #75 Subaru WRX STI could clinch their 7th consecutive U.S. rally championship by winning the rally. But their teammates, Travis Pastrana and Robbie Durant, were right on their tail.

It had been a close battle all season with Subaru Rally Team USA teammates trading 1st and 2nd place finishes throughout the ARA Championship run, resulting in a thin margin between the two in the ARA Driver’s Championship points leading into the final round.

The two Subaru WRX STI teams were so close in points, the Ojibwe winner would not necessarily take the Championship win. Pastrana and Durant would also need to secure two more stage wins than Higgins and Drew to be crowned 2017 American Rally Association (ARA) Champions. That’s exactly what Pastrana and Durant did, narrowly beating Higgins and Drew to win the ARA Championship Title this weekend in MN.

Rain had fallen in Detroit Lakes making for wet and slippery conditions. Travis Pastrana and Robbie Durant started the rally Friday “at a blistering pace” winning the first three stages. Higgins and Drew had trouble from the start after hitting a rock that had been pulled out damaging the inside of the wheel and getting a flat tire. Then more misfortune occurred.

Higgins says, “While changing the wheel I burned up my fingers trying to get the broken wheel off, but then I had to do the next few stages with the steering all bent. Stage two, through a puddle, the water came up through the car and sprayed the inside of the windscreen, so we did 20 miles without being able to clean the windscreen. To top it all off, we came into the last stage and the tires we planned to go out on were not the ones that were fitted.” The troubles for the #75 Subaru WRX STI team didn’t stop there. On Stage 5, West Gulch, the windshield wiper got jammed on a GoPro camera forcing them to stop and free the wiper.

Pastrana and Durant dominated until the end of the day on Friday taking a commanding lead going into Saturday. It was Higgins and Drew dominating the majority of Saturday’s stage wins, however, Pastrana’s hot performance on Friday left the twin 2017 Subaru WRX STI’s, literally tied right down to the next to the last stage.

The entire 2017 rally season and ARA Championship winner came down to the results of the final two stages. On the first run through, Higgins unfortunately hit a chicane and was given a 15 second penalty. This effectively made it impossible for the #75 WRX STI team to win the required two stages. 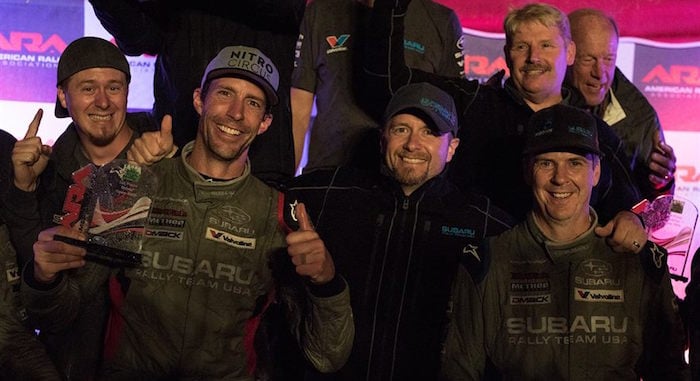 It was an intensely fought battle that raged on the rain soaked and twisty Minnesota forest roads all weekend. In the end, it was Travis Pastrana and Robbie Durant in the #199 Subaru WRX STI narrowly beating SRTUSA #75 piloted by David Higgins and co-driver Craig Drew for the 2017 American Rally Association Championship Title. Congratulations to Pastrana and Durant for an impressive Ojibwe Forests Rally win and a thrilling end to the season.