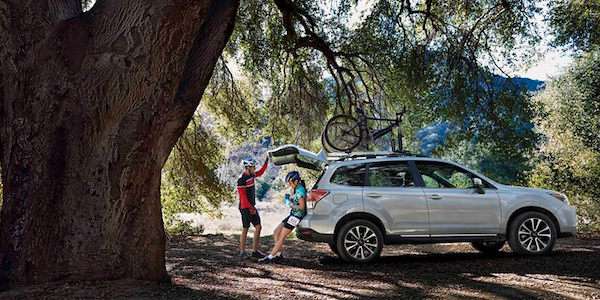 One Reason Why Subaru Forester Only Gets a Bronze Medal

The 2016 Subaru Forester gets high marks in UK’s 2016 Driver Power survey. What 4 things stand out and what doesn’t impress owners?
Advertisement

In the Auto Express Driver Power survey, the 2016 Subaru Forester gets high marks and has been awarded Bronze in the Off Road / SUV category. In the Auto Express UK’s Best Cars to Own survey, close to 50,000 respondents rated the Forester as the eighth best vehicle to own out of 183 models in the study. What stood out in the survey?

The Driver Power study is voted for exclusively by car owners in the UK, with 49,702 respondents taking part this year, the 15th survey conducted by AE. Cars are rated across 10 judging categories, with drivers rating 183 models across 32 auto manufacturers. Owners ranked the multi-purpose Forester SUV exceptionally high in four areas.

Brian Walters, Director, Research and Insights at Driver Power commented: “In 2016, the Subaru Forester Mk4 performed brilliantly, improving in six of the 10 Driver Power judging categories. Owners of the Forester rate it highly for its reliability, practicality, ease of driving, and build quality.” Why did Forester only get a Bronze medal and not Silver or Gold?

AE says the 2016 Subaru Forester rose in the Driver Power rankings this year mainly because of its reliability and build quality. They touted its tall driving position resulting in good visibility and its all-weather AWD capabilities. Forester was also rated highly by owners for ride quality. Forester got low marks for the car’s poor rating for in-car tech. Owners weren’t impressed with the vehicles multimedia navigation system. But the large cargo area and interior received praise for practicality.

Forester is Subaru’s number one seller

Forester scored ahead of some luxury crossovers and popular vehicles like the Lexus RX, Jeep Grand Cherokee, Lexus NX and Nissan Leaf. The 2016 Subaru Forester is the Japanese automaker’s best-selling model in the UK as it is here in the US. It’s more popular than the Outback wagon and Crosstrek crossover. Sales of the Forester were falling behind until it got a complete remodel in 2014.

For 2016, the Forester gets high marks for reliability, practicality, ease of driving, and build quality, and low marks for in-car tech in the 2016 Driver Power survey. For 2017, the new Forester will be coming with even more refinements and upgrades you can read about here. Will the new technology improve Forester's rating?

LG's New EV Battery Plant Is a Welcome News for Tesla
Tesla Giga Berlin's New Hurdle: It's Not Only the Gov't, but Now Tesla Itself
END_OF_DOCUMENT_TOKEN_TO_BE_REPLACED