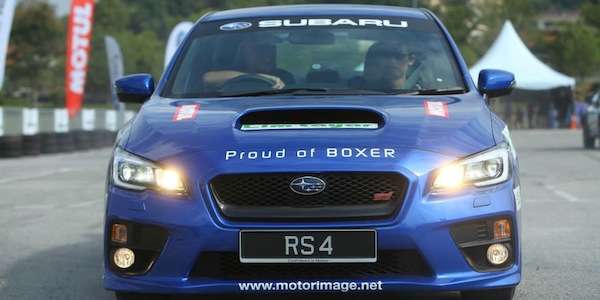 The 2015 Subaru WRX and WRX STI makes its dealer launch in Malaysia. Why won’t WRX fans be able to buy a 6-speed manual?
Advertisement

Motor Image, the authorized distributor for Subaru in Malaysia, launched the new-generation 2015 Subaru WRX and 2015 WRX STI with one glaring hole. Malaysian performance fans won’t be able to buy the 2015 Subaru WRX with a new fun 6-speed manual gearbox. Motor Image will only offer the Lineartronic Continuously Variable Transmission (CVT) in the new 2015 WRX. Why won’t Malaysians gets the WRX with a 6-speed transmission?

One of the big improvements Subaru made to the new-generation 2015 WRX was the new 6-speed manual gearbox that replaces the outgoing 5-speed transmission. Fans around the globe were excited to see WRX get the same six-speed close ratio standard transmission that the WRX STI comes with. All other global markets will get the new 2015 WRX with a choice of two transmissions, manual or automatic. Why not in Malaysia?

If performance fans in Malaysia want a standard gearbox, they will have to step up to the 2015 WRX STI that comes standard with the six-speed gearbox. But the new 2.0-liter turbocharged boxer engine in the WRX will only be available mated with the Lineartronic CVT in this Asian market. It seems as if Subaru is trying to move more WRX models with CVTs in Malaysia.

We talked to a large Subaru dealer here in the U.S. and they told us that they have not sold a 2015 WRX with a CVT transmission. All their orders are for the new 6-speed manual gearbox. It appears that Subaru isn’t moving many 2015 WRX with the CVT option, at least here in the U.S., and maybe they need to move some of these automatic models.

Subaru calls the automatic option a “Sport” Lineartronic CVT in the new 2015 WRX. It comes with a manual mode and paddle shifters and Subaru says it gets better fuel efficiency (of course), but also benefits from a choice of stepped automatic shifting with eight pre-selected ratios. This is the same Lineartronic automatic CVT transmission found in the 2014 Subaru Forester XT. But Subaru says they’ve tuned the WRX version to provide a “greatly improved” shift response for a sportier ride than the high-torque Lineartronic CVT found in the Forester XT.

But most performance fans are opting for the sportier 6-speed manual. Subaru was wanting WRX to appeal to a larger audience beyond the loyal fan base, but it might not be working. We’ve driven the 2015 WRX six-speed manual gearbox and it’s a joy to drive. Most performance fans are opting for this gearbox and many are ordering the new Short Throw Shifter option. The shorter throw enables faster shifts and has a more positive feel than the original-equipment shifter.

The all-new 2015 Subaru WRX and 2015 WRX STI are making their dealer launch in Malaysia and are available now for performance fans to order. But if they want a WRX with a new six-speed manual gearbox, their only option is to shell out for the higher priced 2015 WRX STI. We aren’t sure why WRX performance fans in Malaysia are getting left out. Maybe Subaru is trying to unload some CVTs in this Asian market.

Other 2015 Subaru WRX / STI stories of interest.
Will anyone really buy a 2015 WRX with a CVT automatic? [video]

E wrote on August 13, 2014 - 6:55am Permalink
It may have to do with the reality that more than 50% of 2015 WRX sales in Australia are CVT equipped versions. If Subaru has a surplus of unsold WRX CVT's, they certainly have poor distribution. I put down a deposit and pre-ordered mine 2 months ago and haven't even got my VIN yet... So much for that theory.
Carl wrote on August 13, 2014 - 11:21am Permalink
It's correct that performance fans like the manual. The daily driver fans of the car like the automatic. The biggest issue isn't that it's only manuals that are on order - the biggest issues are where the inventory that's still available is located, and what color those cars are. Our local dealer has a couple of WRX's and STI's in inventory - it's just that they're not colors that people really want.