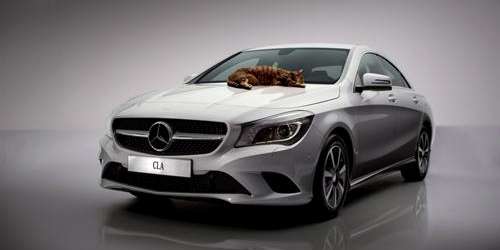 No cats were harmed during the making of this Mercedes-CLA-Class video!

The 2014 Mercedes-Benz CLA-Class is set be the subject of a new TV ad launching this weekend in the UK.
Advertisement

The Mercedes CLA has the one of the most aerodynamic shapes of any production car on the planet. Mercedes wanted to demonstrate just how aerodynamic the new four-door coupe is with a cat. The new ad introduces a sleepy kitty to the CLA’s swoopy coupe form, with predictable results.

The other star is a placid tabby cat called William, who wasn’t harmed and didn’t use any of his nine lives during the making of the video. William the cat was specially trained for the occasion and docile in nature, having appeared on screen for nearly 10 years. The ad uses camera trickery and old fashioned props, enabling William to slide on a piece of gently moved fabric across the windscreen under the careful supervision of his trainer.

Mercedes gives viewers “paws for thought”, and the result is a simple, light-hearted demonstration of slippery aerodynamics in action. It’s a brilliant piece of marketing regardless if you like cats or not. The agency who supplied William, has 30 years’ experience of working with animals for photography, film and advertising.  Their pedigree cats have been specially trained for different types of work, more often using the natural behavior of animals around food or toys.

Mercedes says every precaution was used to keep the cats comfortable and safe. The cats in the film had a purpose built travel box on set, which was used to move the cats to and from the shoot and for the cats during shoot breaks. The filming with the cats took two days in total, with plenty of breaks.

How did Mercedes make the new 2014 CLA the world’s most aerodynamic production car? CLA has a Cd value of 0.23, the new CLA sets a new benchmark, both within the Mercedes-Benz model range, and is the most aerodynamic vehicle on the planet. The drag area also leads the field at 0.51. This makes the 2014 CLA-Class more streamlined than any other car ever produced.

As William the feline demonstrates in the video below, the all-new 2014 Mercedes-Benz CLA-Class is a slippery cat indeed. And no cats were harmed in the making of the Mercedes-Benz CLA TV Advert “Cat.”