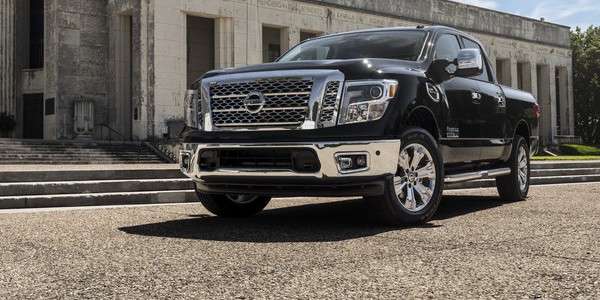 Nissan now offers a 5year/100,000 mile truck warranty on the 2017 Titan. Is it a sales and marketing gimmick?
Advertisement

The toughest challenge Nissan’s new Titan truck will have, is to steal truck buyers from Ford, Chevy and Ram. Is their new 5 year/100,000 mile truck warranty going to lure loyal fans away fro the F-150, Silverado and Ram 1500? It’s not likely. Nissan may get a few, but it won’t be many. So what’s their strategy?

Is the new Titan 5year/100,000 mile truck warranty just a sales and marketing gimmick? Let’s face it, it will be a tough task to pry Ford F-150, Chevy Silverado and Ram 1500 fans away from their beloved trucks. Nissan knows it isn’t going to lure away buyers from their most trusted full-size truck brands.

Nissan has a strategy, and it may be going after first-time truck buyers. In the Titan’s first full month, the full-size half-ton showed huge gains. Titan was up 130.4 percent over the previous years sales with the first-generation truck. Titan’s new second-generation model has a long way to go with just 10,974 trucks sold in September compared with the F-150s 595,656 units sold.

Nissan does steal away exec from RAM

Titan now has Fred Diaz, the ex boss of RAM trucks, running the show and things are sure to get interesting. Diaz has a strategy. What the ex RAM boss accomplished was a push with the new Titan that’s intended at luring in first time truck buyers.

The first thing Diaz did was to pull a move straight out of the Kia/Hyundai playbook by giving the Titan the best truck warranty in America. 5 years and 100,000 worry-free miles bumper to bumper. The next thing he did was to up Titan’s tow rating with the best in-class at 9,390 lbs. compared with 9000 lbs for the Ford F-150. He also came up with new special-equipment package called “Texas Titan”. Just like Ford has the King Ranch F-150, Nissan now has their own Texas-style truck.

Will this be enough?

Yes, it’s a sales and marketing gimmick that won’t lure many buyers away from their trusted brands. But it could interest first-time truck buyers to look at the new-generation 2017 Nissan Titan full-size truck. If Nissan really wanted to shake things up and put their money where their mouth is, they would offer the same 5 year/100,000 bumper to bumper warranty on their entire lineup of vehicles.