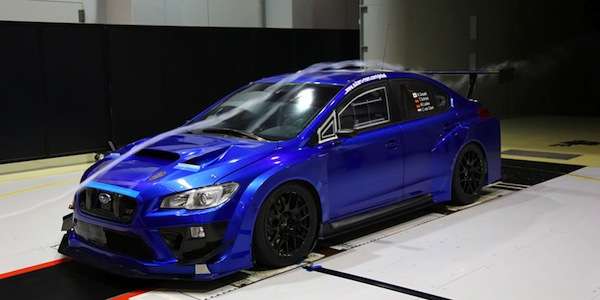 Subaru is getting the new 2015 WRX STI NBR race car ready to compete in the Nurburgring 24-hour race this year. Subaru Technica International (STI) took the new STI NBR car to Fuji Heavy Industries (FHI) headquarter’s experimental wind tunnel facility in Gunma, Japan for a series of tests. The new 2015 WRX STI NBR Challenge car is a new car and was first unveiled at the Tokyo Auto Salon for fans to see.

The 2015 STI NBR race car that was unveiled at the Tokyo Auto Salon had not received the wind tunnel testing and the car was brought back to the Subaru facility in Gunma. After the data is analyzed, the car will be modified with its final aerodynamic specs before it departs for its transport to Germany for the shakedown.

Besides the new aerodynamic enhancements, 2015 STI NBR gets stability and body rigidity improvements. The 2.0-liter turbocharged boxer engine has also been enhanced and will have more output than last year. Visibility for seeing the racing flags has also been improved by introducing a left-hand drive car.

With the results from the wind tunnel tests, the body shape of this years STI NBR race car is changed from last years car. STI says this car will be more aerodynamic and the results will make the car faster. STI is hoping it will make the car more fuel efficient which will result in fewer pit stops and a faster time this year.

Subaru will again participate in the Nurburgring 24-Hour race this year on May 14-17 in Germany. This will be the eight consecutive year that STI and Subaru have participated and they are looking forward to the challenge. The new car builds on the base car which is the 2015 Subaru WRX STI production car, and gets improvements over last years NBR car. Come back tomorrow and we’ll check out exactly how STI made this new STI NBR faster.