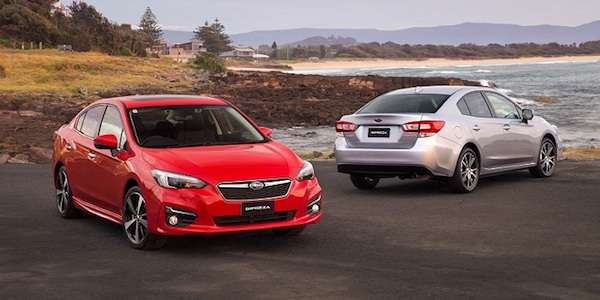 Subaru has issued a recall, according to the National Highway Traffic Safety Administration (NHTSA), for a 2017 Impreza compact rearview camera issue. The problem with the new Impreza is a software glitch. NHTSA says the rearview camera display may not work properly. There are 25,567 Impreza compacts that are potentially involved with this recall, and 100 percent are estimated to be defective. There’s an increased risk of crash or injury.

All 2017 Subaru sedans and 5-Door compact vehicles now come standard with a rearview camera for safety. The 2017 Impreza’s rearview camera display that does not function properly can reduce the driver’s view of what is behind the car, and potentially increase the risk of a crash. Or worse, the driver could back over a pedestrian or child.

The rearview camera image may not display properly due to a software problem within the Impreza’s infotainment system. Subaru says during initial boot-up, a memory error might result in a blank screen, or if multiple processes occur at the same time, the screen might freeze. If the rearview camera image is not displayed or the image freezes, it does not provide a view of the area behind the vehicle when the compact car is in reverse, risking a crash or injury.

The supplier of the software has confirmed there is a defect and has provided Subaru their findings which the automaker needed to validate the issue and the corrective action. Subaru dealers will reprogram the Impreza’s infotainment unit with counter-measured software.

What should Impreza owners do?

Subaru of America will notify 2017 Impreza sedan and 5-Door owners, and dealers will update the infotainment software free of charge. The recall is expected to begin on March 20, 2017. Owners may contact Subaru customer service at 1-800-782-2783. Subaru's number for the recall is WTN-74.