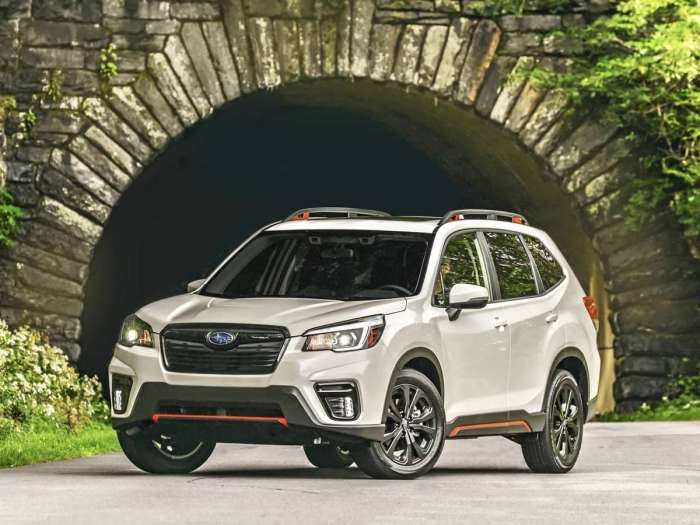 The all-new 2019 Subaru Forester gets standard EyeSight driver assist. It records everything including accidents and could be used as evidence in court.
Advertisement

Subaru is all about safety and it’s one of their core values along with the Boxer engine, and all-wheel-drive. The new fifth-generation Subaru Forester now comes standard with the brand’s EyeSight safety system that will feature a host of safety tech like Automatic Pre-Collision Braking, Adaptive Cruise Control, Lane Departure, and Sway Warning, and Pre-Collision Throttle Management. Subaru EyeSight features four main safety systems that are designed to prevent accidents from occurring.

But if an accident does occur, the system’s video camera could be used in court. According to a report from Cars.com, EyeSight's cameras record footage of the road ahead on a 22-second loop. Dominick Infante, Subaru of America’s Director of Corporate Communications, told Cars that Subaru owners using EyeSight need to request to see the last 22 seconds of footage, but a court can also order access to the tape. "You can't unless you specifically request to see it or there's a lawsuit," Infante explained, adding later that "you have to give written permission or you have to be subpoenaed."

A report from GovTech, says Subaru isn’t alone, and recording and transmitting footage from a driving car is common practice using a “black box.” They are called “event data recorders” (EDR) and have been placed in vehicles since the 1990s initially tracking when airbags deployed. The new iterations can now record dozens of indicators including vehicle speed, if seat belts were worn, whether the brakes were applied and steering wheel position. The report says most event recorders capture about six seconds of data before a crash, but some newer models can retain up to six minutes.

EyeSight could be used in traffic accident investigations to reconstruct certain aspects of the crash. Subaru’s EyeSight cameras sit high on the windshield with an unobstructed view of the road. The windshield wipers even keep the video camera’s eyes free of debris if it’s snowing or raining allowing a clear picture of what happened ahead.

The recorded data still belongs to the owner of the vehicle, but as Infante says, investigators can obtain the data by consent from the vehicle owner, or from a warrant and can be used as evidence in court to prove fault. The new 2019 Subaru Forester and Ascent family hauler now come standard with EyeSight. The all-wheel-drive vehicles are now safer for customers, but the EyeSight technology could get you into a court battle.