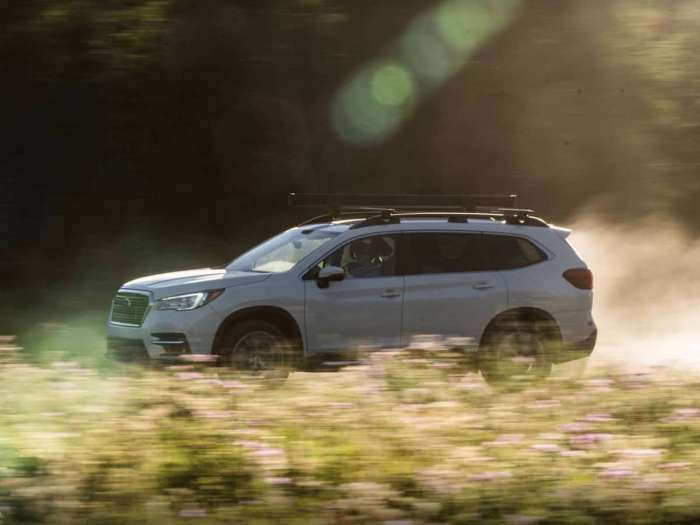 If you want a new Subaru Ascent 3-Row family hauler, you may have to wait. A recent report says you may not even be able to test drive one.
Advertisement

According to the Indiana Business Journal, the new 2019 Subaru Ascent is a huge success right out of the gate. The new Ascent is manufactured in Lafayette, Indiana where the Outback, Impreza, and Legacy are also built. But consumers who want one may have to wait until Subaru Indiana Automotive can begin producing enough of the 3-Row family haulers to satisfy demand.

According to the report by IBJ, consumers who want one, are going to have to wait to even get a test drive. Subaru of America CEO Tom Doll said the company sold 4,000 of the vehicles more than two months before deliveries began. And he says the new 3-Row family hauler has proven to be the brand’s biggest product launch in at least 22 years.

Back in 1996, Subaru launched the Outback wagon which was the start of Subaru’s success story. It was the brand’s first mainstream model to have the six-cylinder version of our horizontally opposed Boxer engine, which was introduced in 2000. Outback is now Subaru of America’s top-selling vehicle in the lineup. Could the Ascent launch change that?

The new 2019 Ascent was designed in Japan, but designers drew it up with American families in mind. Subaru dealers in the U.S. approached Subaru Corporation with the idea and told them how big it needed to be. Subaru listened, and the Japanese automaker has already hit a home run with the largest vehicle they’ve ever produced. “Total home run,” Doll said in an interview at the company’s New Jersey headquarters. “It has been unbelievable.”

READ: Why the New Subaru Ascent 3-Row SUV Will Be a Game-Changer

Subaru’s other Japanese automakers, Toyota, Nissan, Honda and Mazda each have large successful SUVs in the U.S., so why not Subaru? The 3-Row SUV will compete with the Toyota Highlander, Nissan Pathfinder, Honda Pilot, Mazda CX-9, and American entries like the Ford Explorer, Chevy Traverse, Dodge Durango and Jeep Grand Cherokee.

Subaru was a little late to the 3-Row party, but Subaru doesn’t take many risky moves. They knew their current customer base was having to leave the brand when their families grew out of the Outback, Forster and Crosstrek models. Now customers can move up to the all-new 2019 Ascent 3-Row family hauler. If you want one, you may have to wait to get a test drive.