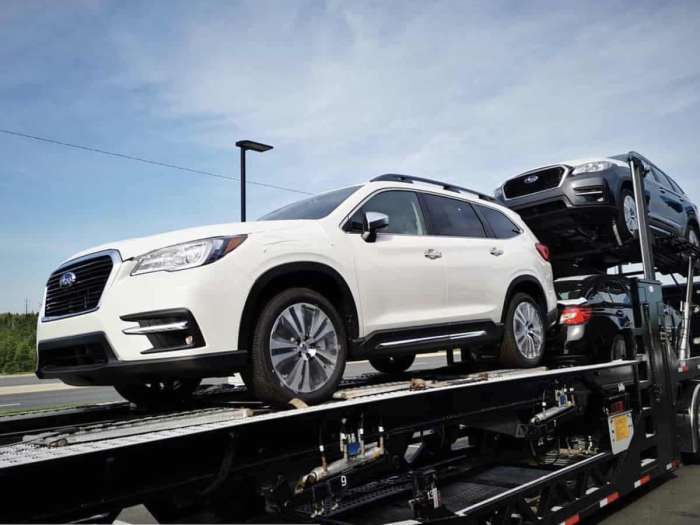 The all-new 2019 Subaru Ascent 3-Row family hauler gets off to a fast start. See how many Subaru sold in the first two weeks.
Advertisement

The largest vehicle Subaru has ever built is off to a fast start. Subaru sold 1,897 of the first all-new 3-row Ascent SUVs in its first two weeks as the first ones began arriving in June. The Ascent 3-Row family hauler is built in the U.S. at the plant in Lafayette, Indiana and it’s only being sold in the U.S. and Canada. It could be a big hit for the Japanese automaker.

The first 2019 Subaru Ascent 3-Row vehicle began arriving at Subaru dealers in mid-June and it’s been a big hit with families. Subaru of America (SOA) announced the first sale of its all-new 2019 Ascent 3-Row family hauler last month as it was sold to Samantha Ernest of Pewaukee, Wisconsin. Ernest is a two-time Subaru owner, traded in her 2008 Tribeca, has a growing family and they even own a dog. It’s the ideal family to get the first-ever Ascent sold in America.

Ernest says one of the primary features that drew her to the Ascent is the third-row seating configuration. “My husband, Pat Henderson, and I have two active little boys. They love sports, so we’re always running them to Taekwondo, swimming or team sports with their friends. One of the reasons I wanted this new SUV is because it has the third row. Now that they’re getting a bit older and have more friends, I need more room,” said Samantha Ernest.

Designed in Japan for North Americans

The 2019 Subaru Ascent crossover was designed in Japan, and it’s what North American Subaru dealers and consumers have been asking for. Subaru dealers in the U.S. told Subaru Corp the new Ascent needed to be larger than the Japanese automaker originally had planned and they listened. Families are responding favorably to the new 3-Row from Subaru.

Subaru of Indiana Automotive (SIA) will be producing the new Ascent alongside the Outback, Impreza and Legacy. Jeff Walters, Senior Vice President of Sales says, “Initial sales of our all-new Ascent SUV are strong and we expect further sales growth from this vehicle over the next few months as inventory continues to build.”

The new 3-Row Ascent allows Subaru to enter a whole new large vehicle segment they've been missing until now. It allows their current customer base of young millennials to move up in size as their family grows, and the brand is also expecting many of Ascent buyers to be conquests from other brand’s vehicles. Subaru Canada will get the new Ascent 3-Row this month, as SIA tries to keep up with initial orders as the family hauler is off to a fast start.

Digital Doc wrote on July 9, 2018 - 5:01pm Permalink
The article promises us some initial sales numbers in the subtitle, but from the body of the article, I would infer they have only sold one of these Ascents so far.