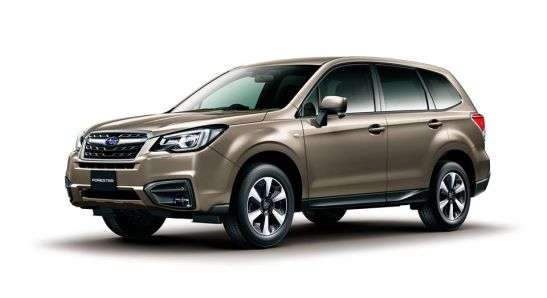 Subaru announced a new Japan-spec Forester and it gets improved safety tech for consumers. Will U.S. buyers see the upgrades?
Advertisement

Subaru Japan has announced a new and improved Japan-spec Forester for consumers, and the upgrades will likely make it to the US-spec SUV. What are the improvements, and why does Subaru put such an emphasis on safety? It’s a core value for the small Japanese automaker and it’s one of their top priorities. A recent survey shows car buyers want safety technology and the study reveals why Subaru is on the right track with what consumers desire in a new car.

Swapalease.com has released results of its annual NCAA March Madness and Cars survey and found that the top two vehicle features car buyers are interested in are safety related. Blind spot monitoring (56 percent) and collision avoidance (41 percent); were most important followed by Large LCD touch pad control displays (32 percent). Vehicle performance (38 percent) is the top characteristic that car buyers look for this year when buying a car; and safety was the second characteristic at 16 percent.

Safety is not a new core value for Subaru; they’ve been testing their cars since the 1960s before testing standards were developed. Safety is a priority for the Japanese automaker, and they say it’s above all other features like all-wheel-drive and their boxer engine. Their new Japan-spec Forester SUV gets upgrades in safety signaling the upgrades will likely make it to US models.

Subaru made their new-generation (Version 3) EyeSight driver assist system standard equipment on all but the base model in Japan. They also expanded the operating speed range on the Active Lane Keeping Assist feature from 60km/h to 65km/h. According to Subaru, this will “reduce the burden on the driver”.

Subaru also made some exterior and interior upgrades to their Japan-spec Forester "X-BREAK" model that doesn’t do anything for safety, but it makes it more attractive. It gets enhanced color accents with 17 inches aluminum wheels with dark gray metallic paint, and added front fog lamp covers side cladding, and roof rails which has new Orange accents. Inside it features orange stitching on the steering wheel, gear shift, center console, shift boot, and armrests. The new Forester gets new exterior colors Crystal White Pearl, Ice Silver metallic, dark gray metallic, and Crystal Black Silica.

Subaru made their new-generation (Version 3) EyeSight driver assist system standard equipment on all Forester SUVs but the base model in Japan and it gets expanded operating speed range on the Active Lane Keeping Assist. The Japan-spec models will be in Subaru showrooms April 3. Look for US-spec 2018 Subaru Forester models to also come standard with the new-generation EyeSight safety system with the additional upgrades when they arrive on US shores later this year.