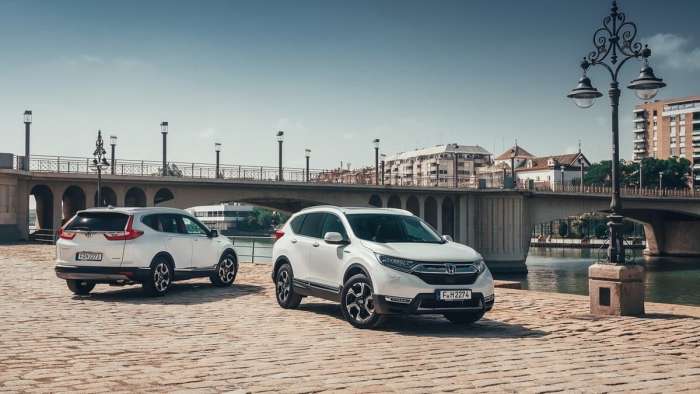 New Honda CR-V Hybrid, When It Will Hit US Shores

The 2020 Honda CR-V Hybrid will first launch in Europe. See when will it be coming for US customers.
Advertisement

The 2019 Honda CR-V is the hot SUV in the Honda stable and it could be getting hotter. Automotive News reports a new 2020 CR-V Hybrid model could be making its way to the U.S. after it makes its launch in Europe. The Honda CR-V Hybrid was first uncovered at the Frankfurt Motor Show in 2017 and in fall 2018, the world got its first look at the sophisticated new SUV.

Unfortunately for Honda fans in the U.S., this new CR-V will first be sold in European markets before it makes its way to North America. The new 2020 Honda CR-V Hybrid is expected to go on sale in the U.S. sometime next year. The new Honda SUV is also expected to receive a mild refresh for the 2020 model change so it may look at bit different from the current European model. 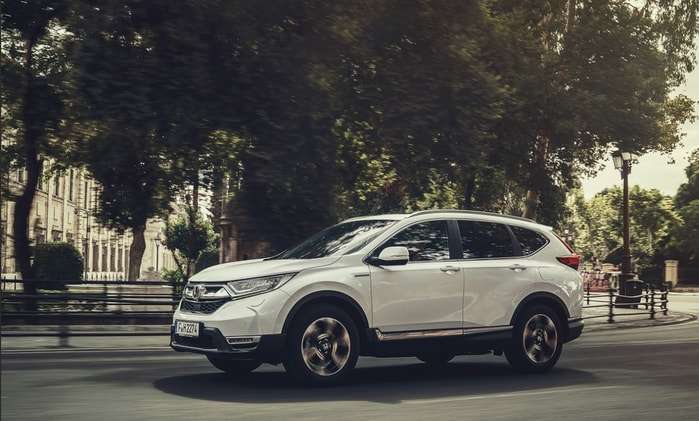 According to AN, Honda CEO Takahiko Hachigo said the Japanese automaker will expand its two-motor hybrid system offerings and anticipates that 60 percent of its global sales will come from hybrid vehicles by the year 2030. This will include new offerings in CR-V, Pilot, and Accord models.

The new 2019 Honda CR-V Hybrid was announced late last year for the European markets and U.S. spec models are expected to be revealed at the end of 2019 or early 2020. The Hybrid CR-V should make its dealer launch sometime next year and come with minor changes from the gas model. 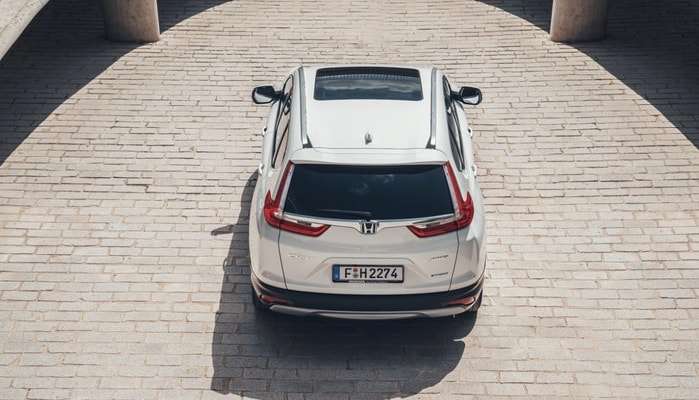 Images of the European 2019 Honda CR-V Hybrid, shows very similar styling to the CR-V with a gasoline-powered engine. Although, the European -spec CR-V Hybrid appears to have some minor differences, including unique running lights and slightly higher ground clearance from the U.S. models.

Honda currently sells the CR-V Hybrid in China where it’s doing quite well where Honda sells gasoline and hybrid variants of the CR-V, the Accord and Inspire sedans and the Odyssey minivan. Honda says they attribute strong growth to the “outstanding performance” of the hybrid vehicles it markets in China. 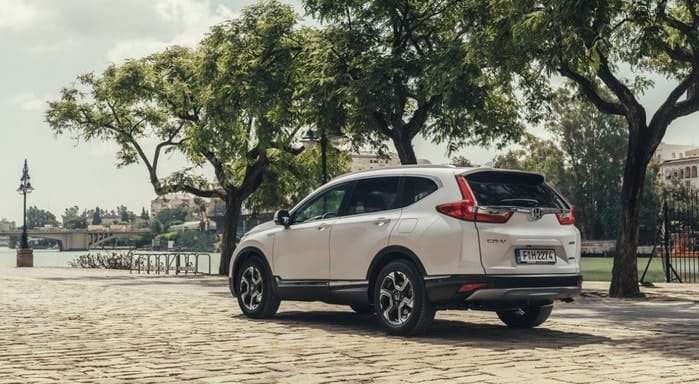 We are speculating the new CR-V Hybrid will also sell well for American Honda. Give us your thoughts below and leave a comment on whether you will be considering a new 2020 Honda CR-V Hybrid model when they reach U.S. shores.

You Might Also Like: You Will Feel Safer Riding In A New Honda CR-V, Civic And Accord Soon

Denis Flierl wrote on September 11, 2019 - 11:22am Permalink
Would you consider buying a new Honda CR-V Hybrid model?
Spin wrote on September 12, 2019 - 2:50am Permalink
Of course. But especially want the FIt/Jazz hybrid. Perfect city car, particularly if its zippy and carries 5 passengers.
Elisa Dolenko wrote on September 12, 2019 - 10:01pm Permalink
I’ve been wanting to purchase a CRV for quite some time. When I first heard about it in 2018. However I read the launch would occur in Europe in 2019. I therefore assumed it would launch in the USA in 2020. The reason I’m waiting is because I really want a hybrid Compact SUV. The only information I can’t find is what is the proposed gas mileage per gallon and tank?
Chris_in_Texas wrote on September 15, 2019 - 12:47pm Permalink
In a heartbeat. My wife loves her 2019 CR-V EX-L and the finance guy in me likes the mileage it gets. I will point out that, with new 75+mph speed limits, we don't get 34 on the highway. A hybrid CR-V will, hopefully, get around 40. Our Accord hybrid is getting about 44 overall. I have said for years that we should take the technology that allows a two ton family sedan to hit 60mph in 6 seconds and less and work on the mileage. This will be a step in the right direction.
Digitaldoc wrote on September 11, 2019 - 12:38pm Permalink
Not a big hybrid fan, so not for me. I wonder which gas engine it uses, and if it gets past the oil gas dilution issue that effected the 1.5T, and to a much lesser extent, the 2.4T. It should theoretically sell well as folks can't get the RAV4 turbo, so silly for Honda to not get it to the US.
Cathy wrote on September 11, 2019 - 7:53pm Permalink
Curious, why aren't you a hybrid fan? I'm not super knowledgeable about hybrids in general but excited to learn more about the new CR-V (I have a 2013 CR-V). Any information you would share is appreciated.
Digitaldoc wrote on September 11, 2019 - 11:15pm Permalink
Most hybrids cost more, and for the mileage I do, I do not believe the financial benefit is favorable. I also have concerns on the longevity of the battery pack as I do not lease cars, and keep them for over 10 years. Finally, most hybrids, a side from some higher end stuff, tends to be not tuned for performance. No offense to hybrid owners that I am sure have a different opinion on this.
Arcee wrote on September 13, 2019 - 3:23pm Permalink
The 2019+ RAV4 is actually marketed by Toyota and journalists as the "performance" variant in the RAV4 lineup, and it only commands a $900 premium over the non-Hybrid. The cost of hybrid technology is rapidly declining, and there will soon be very little premium associated with buying a hybrid over the non-hybrid version. If you keep the vehicle for 10 or more years, you are only talking about $1.73 extra per week over 10 years compared to the non-hybrid. The battery would be fine for 10 years as well.
ANDY wrote on September 18, 2019 - 3:52pm Permalink
Thats a 900 difference in msrp. When a dealer lowers a gas car by thousands more compared to a couple hundred on the hard to find hybrid, then the cost of miles do not add up
Skye Reavis wrote on September 12, 2019 - 6:52am Permalink
When i first was looking for a car i looked for a nice safe car and the cr-v came up. I loved how it looked i havent had the chance to drive one yet. Im trying to save up for my first car and i want it to be a cr-v.
Gale Nash wrote on September 12, 2019 - 4:14pm Permalink
One of the appealing aspects of the CR-V hybrid is the larger 4 cyclinder engine (2L). I do not think that the present 1.5L gas engine that is the only option in most of the CR-V models is worth having. Besides the numerous oil-in-gas problems, it requires a big boost from its turbo. Turbos need higher revs thus reducing the engine life.
DeanMcManis wrote on September 12, 2019 - 6:28pm Permalink
This is LONG overdue, but it really should be a plug-in hybrid. I think that their upcoming Pilot will be a plug in, but it has not yet been announced. Still, if Honda prices it well, it will be a sales hit.
Captain obvious wrote on September 13, 2019 - 8:50am Permalink
Maybe I missed it but I would love to know an estimated upcharge over the standard CR-V (considering the RAV4 hybrid is only $800 more than the non-hybrid) and also the estimated MPG boost. How could you NOT include this info in a news story about the CR-V hybrid???
Miche wrote on September 16, 2019 - 8:08pm Permalink
Where do you see $800 upcharge? The Toyota website shows starting price is $2,200 difference.
Debby Johnson wrote on September 16, 2019 - 7:31am Permalink
I have actually put off buying the Honda CR-V until the hybrid is released in the US. We purchased a Honda Accord new in 2009; and we purchased a new Honda Ridgeline in December 2018. We feel Honda is safe, reliable, and efficient. This will probably be the last car I buy new as I plan to retire in less than 2 years. Please say the hybrid CR-V will be here in the USA for 2020!!
Joy Leroux wrote on September 16, 2019 - 2:45pm Permalink
I love my Honda Accord Hy brid 2017 with the Hybrid Blue color. I drive a lot and I drive quite fast ... let's say .... I still average about 42 miles to the gallon. My other car is a 2018 CRV All wheel drive that I can get to 30.8 MPG and no better. Where has the CRV Hybrid been hiding? We needed it ... like yesterday!