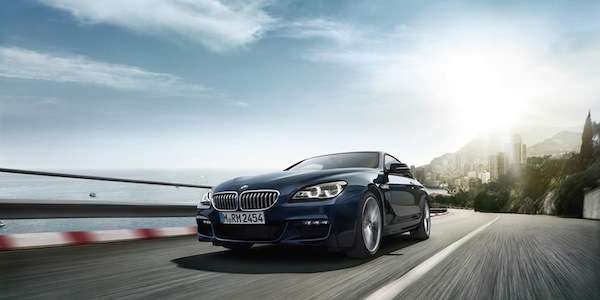 New future BMWs may be safer without you driving

The research vehicle is the new BMW i3, but all future BMW vehicles could be safer and accident free without you driving.
Advertisement

BMW is demonstrating a new collision avoidance and fully-automated parking system that will revolutionize how we drive and park cars in the near future. The Bavarian automaker brought a teched-up BMW i3 to the 2015 Consumer Electronics Show (CES) in Las Vegas to preview the new high-tech safety and parking system before the show starts in January.

BMW previewed the system before CES which features a 360-degree collision avoidance system. The research vehicle is a new BMW i3 equipped with four advanced laser scanners that record the environment and can identify impediments such as columns like you would find in a parking garage. The driver can use this is a dimly lit parking garage for example and the system will recognize a column or a car that the vehicle is approaching too quickly and applies the brakes. The system releases the brakes if the driver steers away or changes direction.

A driverless BMW i3 parks itself

The BMW i3 is equipped with innovative sensors that allow the vehicle to navigate through a parking garage and park itself without any driver involvement. In fact they demonstrated the BMW i3 parking itself with no one in the vehicle. BMW says when in fully-automated mode, the system will allow individual mobility free of accidents with a driver and also with no driver at all.

BMW says a driver will be able to pull up to his intended destination, get out of the vehicle, activate the Remote Valet Parking assistant and the car will then be able to park itself. The system combines information from the laser scanners with the digital site plan of a building, and when the driver uses the Smartwatch to activate the fully-automated Remote Valet Parking Assistant, the system will steer the vehicle independently through the levels, while the driver is out of the car and on his or her way to a business appointment.

BMW i3 locks itself and waits to be called

BMW says that once the BMW i3 has arrived at the parking space, the vehicle locks itself and waits to be called by Smartwatch and voice command. Once called by the driver, the vehicle’s fully automated Remote Valet Parking Assistant then calculates the exact time until the driver arrives at the parking garage and starts up the BMW i3. The car then picks up the driver where he or she was dropped off for the business appointment.

BMW has been developing this technology since 2009 when they gave a highly-automated demonstration of a BMW driving around the North Loop of the Nurburgring and later on at the race tracks at Laguna Seca, Zandvoort and Valencia, and back home on the Hockenheimring and the Lausitzring. BMW has since gone on to develop this system with the help of international automobile supplier Continental. BMW’s goal of this partnership is to lay the groundwork for highly automated drive functions up to the year 2020 and beyond.

BMW’s research vehicle is the new BMW i3, but all future BMW vehicles could be equipped with this technology and might be safer and accident free without any driver involvement. Stay tuned.

LG's New EV Battery Plant Is a Welcome News for Tesla
Tesla Giga Berlin's New Hurdle: It's Not Only the Gov't, but Now Tesla Itself
END_OF_DOCUMENT_TOKEN_TO_BE_REPLACED