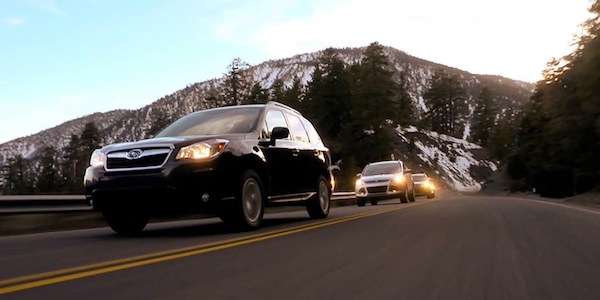 The 2015 Subaru Forester and used Foresters have earned two very important safety ratings. What makes it the safest small SUV on the market?
Advertisement

Subaru is building a strong reputation for having the safest multi-use vehicles on the planet and the newest 2015 Forester follows in that tradition. But it’s not just the new Forester that is receiving accolades. Both the new 2015 Forester and used Forester models models have earned safety recognition, one from the Federal government, and another from Forbes.

For the new 2015 Forester models, the compact SUV gets the highest five star rating from the National Highway Traffic Safety Administration (NHTSA). For used Forester models, Forbes released a report and says Subaru Forester models from 2009 and later are the number one safest used cars for teen drivers under $12,000. The Subaru Legacy models 2010 or later were also on the top list and came in at number 3 on the list.

Safety is not new for Subaru

It didn’t start with the 2015 Forester, as Subaru has been designing safe multi-purpose all-wheel drive vehicles for decades. This was long before the government mandated these safety tests. Subaru began conducting their own tests in the 60s long before there was any official testing being conducted. Forester has been a safe SUV for a long time as Subaru uses what they call their ring-shaped reinforcement in the structure which increases cabin rigidity and absorbs impact energy from any direction.

Forester is not alone in the lineup

Forester is not alone in the Subaru lineup for being their only safe vehicle. Subaru is the only automaker that has received the IIHS top safety pick for their entire lineup of vehicles for the past 4 years. Subaru’s 2015 BRZ sports coupe and the performance 2015 Subaru WRX and WRX STI have also received the top safety pick from IIHS this year. And Subaru’s only hybrid model, the new 2015 XV Crosstrek also received NHTSA’s highest five star rating.

The 2015 Subaru Forester and used Foresters have earned two very important safety ratings, 2015 Forester from the NHTSA and used Foresters get another one from Forbes. Consumers can be confident they are buying the safest new compact SUV or safest used multi-use vehicle on the market today.