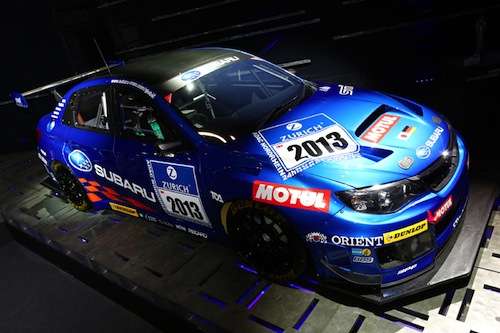 The newly built 2013 Subaru WRX STI 4-door will offer enhanced performance as it competes in the 2013 Nurburgring 24-Hour Race.
Advertisement

Subaru Tecnica International Inc. (STI) announced that the performance company will enter the newly built Subaru WRX STI 4-door in the 2013 Nurburgring 24-Hour Race (NBR) which will take place from May 17 to 20 at the famous race track. The president of Subaru Tecnica International Inc., Hiroyuki Karamatsu, unveiled the new 2013 Subaru Impreza WRX STI at the 2013 Tokyo Auto Salon last month. The car will offer enhanced performance based on the know-how used for the development of the vehicle that won the SP3T class in the last 2 NBRs.

STI and the 2013 WRX STI team will be aiming for a win in the SP3T, a class for turbo-charged cars which have an engine of 2 liters or less, for the 3rd time in a row following 2011 and 2012. This will be SUBARU's 6th consecutive entry in the NBR since 2008. The team will consist of veteran driver Toshihiro Yoshida and Kota Sasaki, who will be competing in the NBR for the 3rd time this year. They will be driving the WRX STI NBR Challenge car together with 2 European drivers.

The newly developed 2013 Subaru WRX STI race car features a larger underspoiler up front to restrict front lift. New overfenders around the rear tire-housing and a defuser has been added on the rear underbody to improve aerodynamics. Other improvements include moving the fuel tank to improve weight balance, and BBS forged magnesium wheels have been used to reduce the unspringing weight of the 24-hour Nurburgring race car. The improvements were made to increase speeds on the fast corners at the famous German track. A new sequential gearbox will be coupled to the Subaru Boxer engine when it is sent to Germany in April.

To get ready for the grueling 24-hour race, the team will compete in a shorter four-hour race in the 3rd round of the VLN endurance series at Nurburgring on April 13 to work on setups for the car before appearing in the official qualifying on the Friday and Saturday of race week. The STI team will also be joined by six Subaru dealer mechanics who get the honor to be in charge of working in the pits changing tires, and servicing the car while utilizing their skills and expertise gained through their professional tech careers at the Japanese dealerships.

The 24-hour endurance race events will be held on May 17-20, 2013 as the drivers in the ADAC Zurich 24-hour race will again be piloting their cars around the 25-kilometer long combination of Nordschleife and Grand Prix Circuit. For one day and one night the driver of the 2013 WRX STI along with the other drivers will push themselves and their machines to the limit. The field of over 200 vehicles will compete while driving full speed for one whole day and night around the longest racetrack in the world.

The team at STI will take all their work and put it to the test as they take the newly built 2013 Subaru WRX STI Nurburgring race car and push it and the drivers to extreme limits.