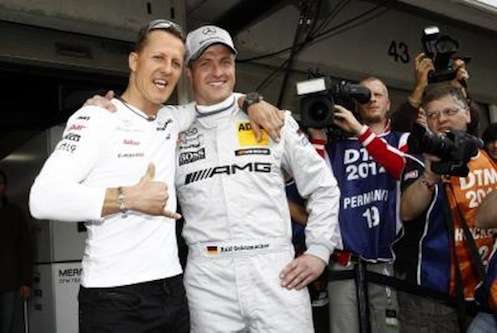 Michael Schumacher is second richest athlete in the world

According to the Sunday Times, seven time world champion Michael Schumacher is the world’s second-richest athlete earning $823 million over his career. He comes in second to PGA golfer Tiger Woods who has career earnings of $869 million the newspaper said. And when you compare his earnings with other top athletes, it brings things into perspective. Schumacher has a comfortable lead over Michael Jordan ($516m), Roger Federer ($316m) and David Beckham ($258m) even with their storied careers.

In the world of Formula 1 drivers, next on the list would be Fernando Alonso and Kimi Raikkonen, both of whom have earned an estimated $161 million apiece. Other F1 stars would include Lewis Hamilton who is raked at $89 million, with teammate Jenson Button close behind at $85 million. David Coulthard and Nigel Mansell are both at $80 million, while Jackie Stewart over the course of his career earned $67 million.

Schumacher is driving for the Mercedes AMG team in this years Formula 1 season, and the German born driver is widely regarded as one of the greatest Formula 1 drivers of all time. If his career earnings are any indication, he very well may be. He holds many of the F1 driver records, including most championships, race victories, fastest laps, pole positions, points scored and most races won in a single season, 13 in 2004.

While most sports enthusiasts wouldn’t debate whether Michael Schumacher is one of the greatest F1 driver’s of all time, many would debate whether race car drivers are really athletes. This debate has been discussed by countless sports talk show hosts and writers over the years, and it is clearly a hot issue for many. So while we won’t attempt to debate the issue here, we will give a few facts for readers to ponder.

When you compare the thought processes of a race car driver to those of an NFL quarterback, a race driver must process information at a high rate of speed and make decisions quickly. A driver must know the track conditions, know his car better than he does his wife or girlfriend, and has to be able to communicate with his crew chief at the same time.

And similar to a quarterback, he uses both feet, one on the clutch, the other on the gas, and uses both arms and both hands to maneuver his race car within inches of the other cars. And a race car driver doesn’t get to rest between plays. A race car driver has to be able to slow down and focus better than a baseball player looking to hit a 95 mph fastball.

When you look at the physical punishment a driver endures, the G forces are like having your head pulled from your body as they exit a turn. Add in a cockpit temperature of 135 degrees, and a heart rate that goes from a marathon runner to a sprinter during the race, and you can see that being a race car driver is a lot more than just sitting behind the wheel.

It sounds to me like Michael Schumacher has earned every penny of his $823 million.