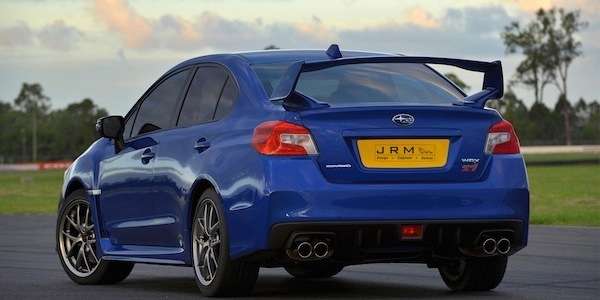 Buy a new 2016 Subaru WRX STI now and JRM will give you thousands off the base model price. Who gets this special limited time pricing?
Advertisement

The good news is, if you want a great deal on a new 2016 Subaru WRX STI you can get thousands off the regular price now. The not so good news is, you have to purchase a rally-ready NR4-specification built Subaru STI from JRM.

For a limited time, JRM is reducing the price of the base WRX STI donor car. The normal price for an NR4-spec Subaru (in gravel or tarmac trim and LHD or RHD) and a right hand drive Subaru WRX STI base car is 123,000 British Pounds. But for a limited time only, JRM has reduced the price to 110,000 +VAT where applicable.

JRM says this offer is only open to the next five drivers or teams that purchase an NR4-specification Subaru STI from them before September 30. JRM is an official Base Team of Subaru Tecnica International (STI) and its NR4-spec Subaru WRX STI has been built in conjunction with engineers at Subaru’s performance division in Japan.

What does JRM add to the stock WRX STI?

Drivers and teams can evaluate JRM’s NR4 Subaru WRX STI before considering to purchase the rally-ready STI. The next test days are September 10 and 24 at the MIRA test and development facility in Leicestershire. For more info on the NR4-spec Subaru WRX STI contact: Steve Smith (JRM Senior Sales Manager) +44 (0) 7590 851862 [email protected]